The Vader shares a similar profile to that of the PCJ 600, sharing the front forks, swingarm and accesories. However, the Vader features various details that are unique to the vehicle, being the front mudguard, front fairing with dual headlights, chrome framing around the upper side of the engine, a different fuel tank, twin seats, foot pads and a carbon-fiber rear mudguard.

The bike's initial design and influence remain identical, but the bike will now spawn with smaller features and different colour variations. "Vader" markings can be seen on either side of the fuel tank, alongside a kanji.

The Vader returns with minimal performance changes, other than a slightly-lowered curb weight, now weighing in a 240 kg, and tweaks to handling and turning cycles. The top speed remains the same, but its acceleration seems to be more responsive due to better traction; a result of the alterations to the handling system. 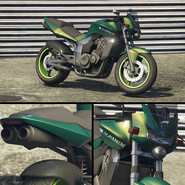 Retrieved from "https://gta.fandom.com/wiki/Vader?oldid=1168208"
Community content is available under CC-BY-SA unless otherwise noted.