“Not ready to commit to the Infernus? Why not take the little brother out for a spin? Almost as fast and just as many heads will turn when you toss the keys to a valet that makes $10 an hour and hope he doesn't wreck it. It's the car that says "I'm not that rich, but I am that vain. Blow me.”

The Vacca is considered as the little brother of the Infernus, sharing a similar body shape and layout, but with a slightly shorter lenght and standard doors. The front of the car features three meshed intakes, with the central one being smaller than the outer ones and having the license plate just above it. The upper area has headlamp housings that are finished in carbon-fibre, each one containing large circular units with smaller ones almost above them, while the front boot bears a slightly impressed area around the outer edges and opens to reveal a spacious luggage compartment. The manufacturer logo can be seen on the front of the boot compartment.

The sides of the car have large inset formations that lead to a set of dual vertical vents, intended to let air to flow through the engine bay and rear brakes, while the doors have mirror shells finished in carbon fibre. The greenhouse area follows a similar shape to its big brother and has blach trim around the windows and a rear engine compartment with carbon-fibre louvres on it, which opens to reveal the engine bay and inner sections also finished in carbon fibre.

The rear of the car features carbon-fibre slatted tail lamps on the outer edges, having two turning light strips on the upper side and two main/brake strips on the lower side, while the centre bears the manufacturer logo. On the middle section, the car has a vented panel that is also finished in carbon fibre, with a narrow shape around the centre and housing two trapezium-shaped exhaust tips. The lower area is occupied by the rear bumper that is fitted with a carbon-fibre diffuser, which holds the license plate on the centre and six blades at the bottom. The area behind the plate is also open for aerodynamic purposes.

The interior of the car is a derivative of the Banshee, sharing the same dials and gauges, central panel finished in carbon fibre and sports seats. However, the dials themselves have a yellow colour, and the horn cap bears the corresponding manufacturer emblem.

The Vacca can only be painted with a single colour, which is applied on the bodywork and the stitches of the dashboard, steering wheel and seats. The car uses five-spoke split rims with low-profile tyres.

The car is capable of high top speeds, owing to its high horse-power. Bearing a powerful engine, the Vacca is very easy to throw around on roads at high speeds. It can curve around bends with ease and weave in and out of traffic without much effort or body roll, though some oversteer is noticeable. Shifts are rather quick but sometimes it takes a while for the Vacca to gain traction after powerful take off, resulting in the transmission hesitating to upshift. This is a result of the vehicle using rear wheel drive instead of its sister car, the Obey 9F's four wheel drive system. Crash deformation is good overall, with the vehicle being able to sustain multiple frontal hits without damaging its engine, which is located in the rear.

According to the website, the Vacca a 5.1L engine that can push 540hp. Its engine model, however, is not very detailed and cannot fully reveal the engine cylinder configuration, aside from the fact that it is set in a "V" configuration, as with its brother, the Infernus. It is coupled to a 6-speed gearbox in a rear-mid engine, rear wheel drive layout. Its engine sound is the same one from the Cheetah.

The Vacca in the enhanced version.

The Vacca on the Rockstar Games Social Club. 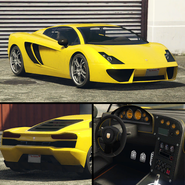 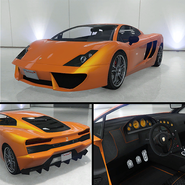 The Vacca on Legendary Motorsport.

The Vacca on the updated Rockstar Games Social Club.

The Vacca in a Cinematic preview on Rockstar Games Social Club.