Unknown
“Hey, folks. Just to let you know we have our window. So, whenever you're ready.”
— The pilot announcing the imminent departure of the first flight to Cayo Perico.

He has a unique character model, being a dark-haired Caucasian male wearing a dark blue pilot uniform and aviator sunglasses.

The pilot is first seen at LSIA when the player joins English Dave, Keinemusik, and two unnamed party girls on a charter flight to Cayo Perico to scope out the island while posing as a tour manager for the DJs. He then waits at the Cayo Perico Airstrip for the player who can approach him to return to Los Santos. 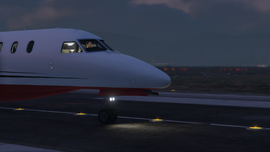 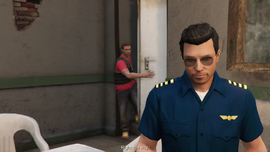 With Enrique at the airstrip on Cayo Perico.