As implied, the VCPD WinterGreen is based on the civilian WinterGreen, which in turn is based on a Harley-Davidson Electra Glide, true to the usage of the Electra Glide by real-life police officials. The VCPD WinterGreen, however, can be identified by the presence of red strobe lights, a permanently black paint job, no top box and lower handlebars. The bike also sports a minor cosmetic difference between the PlayStation Portable and PlayStation 2 versions of the game, featuring a taller windshield in the PS2 version than in the PSP version.

Sharing a similar body as the WinterGreen, the performance of the VCPD WinterGreen may be considered similar to or better than the WinterGreen's, with good speed and acceleration. Similar in construction to the Freeway, however, the WinterGreen requires moderate use of the brakes to handle sharp corners.

Like the HPV-1000 in Grand Theft Auto: San Andreas, the player can shoot forward on a VCPD WinterGreen, making the bike ideal for Vigilante missions so long as its tires are not punctured. 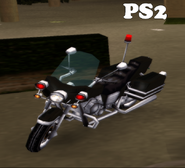 The VCPD WinterGreen in PlayStation 2. 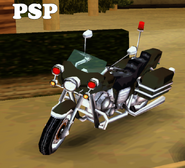 The VCPD WinterGreen in PlayStation Portable.

VCPD WinterGreens will follow the player if they have a Wanted Level of 1 star, but disappear at higher levels due to the vehicle being weaker than most law enforcement vehicles.