Standard White - 100%
“Looking for something wild? Climb inside the fierce V-STR and listen to it growl as it bares that distinctive grill and charges the competition. With this much untamed energy, get ready to lose control. Figuratively, obviously. This high-performance luxury sedan is the jewel in Albany's crown.”
— Legendary Motorsport description.

The Albany V-STR is a four-door executive car featured in Grand Theft Auto Online as part of the continuation of the The Diamond Casino Heist update, released on January 30, 2020, during the V-STR Week event.

The V-STR is depicted as a mid-size 4-door luxury sedan, where the front end features a plastic bottom lip/splitter that spans the whole width of the car, followed by a set of three meshed intakes, with the outer ones having plastic finish around and silver horizontal strips with DRLs. On the upper area, the car features a large grille with similar features to the one from the Alpha, bearing an horizontal element with chrome trim around both halves and a circular section bearing the Albany logo, while the front quarters of the car house large black housings with dual headlights and LED-like strips above. The hood has two body lines starting from the upper edges of the grille and run towards the base of the A-pillars on the cabin, while the center has a bulged profile near the windshield and a smoother line that splits the hood. The engine compartment opens to reveal the engine ba and black portions on the front and the rear.

The sides of the car feature dual exit vents between the front wheel arches and the doors, with a black finish and a chrome detail above. There are inset areas passing across the sides, with the upper body lines passing through the chrome door handles and reaching the rear tail lights, and the lower lines almost reaching the rear wheel arches and skirting area. The side skirts also have a protruding detail. The greenhouse area is largely dominated by black trim around the windows, with the lower side trims finished in silver/chrome and the rounded mirror shells with black lower portions and frames, mounted near the A-pillars. The trunk lid is relatively short and features a plastic ducktail spoiler by default.

The rear of the car is mostly dominated by the trunk lid, bearing the corresponding badges below the ducktail spoiler, a silver/chrome strip and an inset section holding the license plate. The outer edges of the car have black tail light housings, each one having numerous red brake strips, vertical turn signals and small reverse lights, as well as red main lights on the inner side, beside the trunk lid. The rear bumper is rather bulky and features a set of vertical exit vents on the edges, a plastic bottom with a diffuser on the center and large dual-exit, dual exhaust pipes.

The cars uses the same "Super1" interior from the Thrax, which is a derivative of the one used in cars like the Nero, the Nero Custom and the XA-21 (though using the same four-seat layout as the Neon). The dial set is the same one from the Thrax, being the same "Prototipo" dials from the X80 Proto (rather than the "Race Generic" set from the aforementioned cars). The horn cap bears the Albany logo.

The vehicle is prominently painted in a primary color, while the mirrors shells are painted in a secondary color. A trim color is available for the interior stitching and backseats. It uses a unique set of 10-spoke rims with low-profile tires.

Despite looking heavy, the V-STR handles remarkably well for a luxury sports car, and doesn't seem to have issues with oversteer, especially on hard corners. This makes it a pretty ideal car for races, and due to its sturdy build, it has a good amount of durability in withstanding collisions and gunfire.

The V-STR is powered by a V8 engine, as suggested by the cover, coupled to an 8-speed gearbox in a front engine, rear wheel drive layout. Its sound is similar to the one used in the Revolter, as well as the Windsor and its convertible variant. 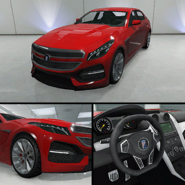 The V-STR on Legendary Motorsport.

The V-STR in the cinematic preview on GTA Online Rockstar Games Social Club. 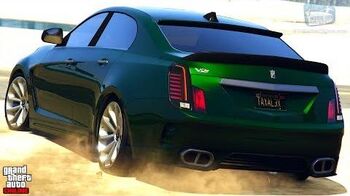