The Utility Truck appears to be based on the International 4700 Series, which is also seen as a service/utility truck, including cherry pickers.

The Utility Truck has a large main chassis that is closely based on the Stockade, sharing the same grille, headlights, cowl and rear-view mirrors. The design of the front bumper, windshield and the cabin in general gives the vehicle a simplier, utilitarian look, in contrast with the Stockade's armored and sturdier profile.

The vehicle is available in two main models, each one having three different additions to the rear compartment, giving it a total of six variations of the same vehicle.

The first model is a cargo/utility truck, which is intended to carry additional equipment as extras. It is operated by Jonny Shapiro Gas Specialist.

The second model is a crane truck/cherry picker, which appears with a non-functional crane on the back. It is operated by Nowinski Construction Corporation.

The Utility Truck is a good truck to pick for both good speed and good durability. While it is not like a Phantom or Packer, it is still worthwhile. It has an average acceleration, and an alright top speed. Its engine and fuel tank are not largely exposed unlike other trucks in the game, making it a good pick for ramming into vehicles.

It is powered by a massive 8000cc (8L) engine, according to the badges, and is modeled as a turbocharged Inline-4 engine. It provides a large amount of power for the truck to accelerate and maintain good speed, even when crashing. 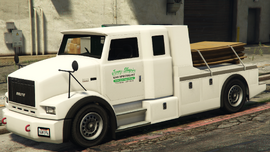 The Utility Truck (Cargo) on the Rockstar Games Social Club.

Retrieved from "https://gta.fandom.com/wiki/Utility_Truck?oldid=1190303"
Community content is available under CC-BY-SA unless otherwise noted.