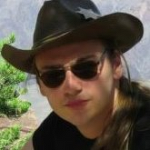 Greetings. I was starting to wonder how the infobox themes were defined after you added it to the template before defining anything in the css. :)

Hi! New infoboxes have default theming which is based on link color used in theme designer. It is aimed for users who do not have any css experteese :)

Thanks for creating the page! It will be very useful.

BTW good job with the template. It just needed few fixes and I know it's hard to spot these nasty missing characters without good error messages. We are currently finishing the work on better error messages.  Shareif (talk) 10:26, June 19, 2015 (UTC)

Hello! Great job on the infoboxes - I really like it so far :)

I have a few questions:

Thanks! Looks perfect on both desktop and mobile :) I did a small edit to mission and heist infoboxes if that's ok (only changed two sections so they use the bigger space). I've noticed that the line breaks too early on the bigger spaces though, as seen in the picture. This also happens on the normal infobox mission. 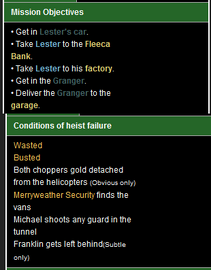 Good job with changing the boxes. Also thanks for reporting a defect. I'll let our engineering team Tomorrow. Feel free to modify these boxes as you like :) Shareif (talk) 12:43, June 21, 2015 (UTC)

Go for it. smurfy (coms)

How come only the Missions, Heists and Character Infoboxes have had this update? Why leave out all the other infoboxes, or at least the other main ones, such as Vehicles and Weapons?.

Good point. For now I was testing only the Mission, Heist and character. We can start working on the others on Monday. Are you ok with that Smurfy. Shareif (talk) 21:46, June 21, 2015 (UTC)

Already Monday here, been working for an hour already :)  But yeah, I'm happy with the outcome now with these few test templates so we can start rolling out into all the live templates without needing to build any more duplicates. Monk, this was as much a learning process for WildBrick and I (and anyone else watching) so we can get a better understanding of the new template structure and the underlying css required for the infobox themes. Eventually we will be able to build them ourselves from scratch. smurfy (coms) 21:52, June 21, 2015 (UTC)

Ah, so it's like a test. Alright, that's fine. Anyway, slightly fault regarding inserting "target" to the Mission Infobox - It doesn't show the information typed in the fields. It seems to work on the heists template. I'll see what's happened in the template itself, but It may be a fault with the new changes.

18:42, June 22, 2015 (UTC)
Infact, no, It has not being fixed. Rain reordered the template fields on one mission article, which fixed it. If this was the case, we'd have to reorder the target field on all mission pages' infoboxes. It seems to be an internal error within the template causing the section to disappear once the page is published/saved. Could you take a look?

(Reset indent) Which order? All I did was adding the "Target" field back to the template, because it was lacking (thus explaining why it wasn't on any page). Nothing related to order or anything else.

The target section was already in that specific article, however, it didn't show up. You seemed to fix it by moving it to the bottom of the template, which made it show up (I know it works, as I did it my self on Potshot's infobox).

No Monk, Rain had to do this because the target field did not exist in the template, so it did not matter where you put it on a page calling the template, it would never appear in the displayed output. smurfy (coms) 20:20, June 22, 2015 (UTC)

(was just about to post that). It didn't show up to you until you edited the article because templates (especially those like mission template which are used on a load of articles) don't update across all pages for a moment. It showed up to you once you edited the page, but it doesn't matter where the "target" field is. Template usage doesn't change, just the layout and code.

I see, but now, due to this new system, all the currently installed "target" section details will not appear until editing, clicking edit will show the target section, but when publishing (with no changes, obviously) it disappears. Can someone check how to fix this (I did this on Potshot's infobox).

"The pages should purge themselves after few hours."
— Shareif

I thought this was refering to the new layout in general, not just the "target" issue, which I thought would purge through with the new layout, but hey ho.

Hi! Sorry for the dealay but our system gets a bit slow when too many pages change at once. Please let me know if I can help somehow! Also Congrats on making all the changes!

Hi, I would like to know if we'll have the possibility to change the image size in the infoboxes. Some pages (like here) have an image size that do not match the image dimensions, and thus they look pretty bad. Any chance we have a field to set a specific image size?

It's a challange right now as I've had to change the default size of the infoboxes and now all images are stretched to fit the width. I'll think about it and will let you know when I fugure something out. Shareif (talk) 21:32, June 22, 2015 (UTC)

Hi. So, the Infobox works really well on mobile ports, but I have noticed, editing infobox fields in the Visual Editor on desktop versions will cause the infobox to compact itself (when we lay it out, we "list" each field so we can see clearly what's in the fields), which puts all the fields back together. Why is this happening? I've noticed it only happens in the visual editor, so editing in source mode of the classic editor avoids it.

Hi, I see the changes you have made to the css. How far away is the markup fix? I have been using square format images to workaround lately but would be nice to stop having to do that. Smurfy: illuminate - communicate - spectate 12:42, August 4, 2015 (UTC)

Gets stretched badly in the portable infobox 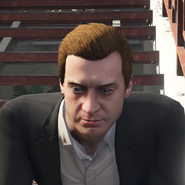 Looks better.
Add a photo to this gallery

So to workaround the stretch issue, I'm avoiding any image that is taller than it is wide (i.e. square or landscape better that portrait orientation). Smurfy: illuminate - communicate - spectate 13:03, August 4, 2015 (UTC)

Ah. I've added height:auto. Now images will will be scaled up instead of being stretched. Please let ma know if that solves your problem (at least to some degree).

Yes, that looks much better. Thanks, a few people reading this will be happy to see this fixed since you went away on June 22nd looking for a solution. Smurfy: illuminate - communicate - spectate 13:28, August 4, 2015 (UTC)

Hello, recently an update to Wikia (I assume, no edits were made to MediaWiki nor template pages here) has broke the portable infoboxes. Any links or formatting changes (such as bold or italic text and the size) in the caption are not shown - most noticable for Infobox vehicles, on every vehicle page (example).

On an unrelated note, I've added a third color variation for the infoboxes a few months ago. Did I do it correctly? I've noticed that "heist" and "mplowrider" (one I've added) also color the background on the captions - could this be changed to black so it fits the other fields? Thanks in advance.

Retrieved from "https://gta.fandom.com/wiki/User_talk:Shareif?oldid=861426"
Community content is available under CC-BY-SA unless otherwise noted.