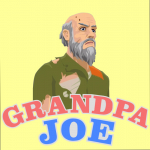 aka The Gaming Mack V

Just to let you know, on The Ballad of Gay Tony page, like all of the game pages that has the theme song player  thing above it, that is NOT TBoGT theme song. That is a song that was heard on the game's radio station. The same goes with people thinking the song that played in the first trailer for GTA V, stupid people think that's the theme song. Just because a song was heard on a game trailer doesn't means its the "official" theme song. Please replace that with "Keep on Walkin". RealgrandpaJoeWCG (talk) 02:09, July 13, 2013 (UTC)