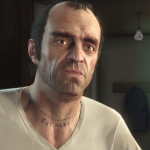 Informing Trevor that Wei Cheng will not be doing a deal with him does not make the translator an antagonist, as he is the messenger and did not make the decision himself. Sam Talk 00:49, August 17, 2015 (UTC)

Hello sir/madam, you still are not following the Image Policy: specifically, you are not naming your images correctly. In the case of your most recent image (a screenshot from "Something Sensible", a Grand Theft Auto V mission), the correct name would be: "SomethingSensible-GTAV-MichaelKillingTrevor.png". Please name your images properly in the future: failure to follow the Image Policy will result in a Warning; continued failure will result in a Block. Thank you.

Retrieved from "https://gta.fandom.com/wiki/User_talk:Pencerah_Anda?oldid=828750"
Community content is available under CC-BY-SA unless otherwise noted.