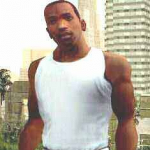 Hi, welcome to GTA Wiki. Thanks for contributing to the File:GTA IV The Horn Deodorant The Strange Mysterium page, and for taking interest in the wiki. Please leave a message on my talk page if I can help with anything, or as alternatives, leave a post on a forum, or refer to the Help pages. The Tom (talk) 09:35, June 22, 2014 (UTC)

Quit adding nonsense to pages. This is your second warning. If you keep on, you'll be reported to an admin.

Okay I understand that but you are not doing it right. First off the images are of poor quality and do not follow the Image Policy. Second, a lot of your edits ended up ruining the page. For example, some of your edits really messed up the Carl Johnson page. Third off, you continuously add back whatever we have undone or reverted, which is known as edit warring. We don't remove anything without a reason. Fourth of all, your grammar isn't that great. If you can change that, maybe I'll see about deleting these two warnings.

Hey man, don't defeat yourself saying you can't do it. You can. First off, try and find some better quality images (for example, don't take pics with your camera unless it is really good). Second, follow the image names part of the Image Policy page to know how to name your images so that they'll be accepted here. Third, if your edits are reverted, do not add them back, talk to the person who removed your edits about what they did wrong and they should happily tell you. Then you can discuss how to fix what you did wrong. Fourth, use a dictionary or thesaurus to improve your grammar here cause that can also cause your edits to be reverted or undone.

I indeed do have GTA San Andreas, but I don't think my iphone or Galaxy tablet will take good enough pics for the wiki.

Those pics are incredible man! I'll move them up to the GTA San Andreas part in the gallery though.

Go ahead but be careful and try not to mess up the page. If anything, press preview before you press publish.

You've been blocked for a week for repeatedly ignoring warnings about not following policy. Tom Talk 22:50, August 21, 2014 (UTC)

The video you are posting is NOT the "Helicopter (GTA LCS)". The helicopter in your video is the Maverick. Stop re-adding this to the incorrect page.

The videos you are adding include various mods. As per the policy, mod-related content is banned on this Wiki. Therefore, I recommend you remove the videos from the various pages they feature on. Thank you. Sam Talk 14:00, June 17, 2015 (UTC)

As another user has pointed out, they also include different player models, unique vehicle colors, and never wanted cheats, amongst others. Sam Talk 14:37, June 17, 2015 (UTC)

thats not pertinent !
those things u listed r simple externals and no reason to remove the videos. the important thing is whats the meaning/ what happened and how you can do it, and Definetly not whats the colour of the car or what kinda model the player is.. —Preceding unsigned comment added by MrGTA500 (talk • contribs) Please remember to sign your talk page messages with ~~~~.

You have violated the policy by uploading videos that are modded. Although the purpose of the videos is to show glitches in game, but once it violated the policy, no matter how minor, you still have to remove it. MC (MyComputer) 14:54, June 17, 2015 (UTC)

i think your just annoyed cause i added "various" content..
how do u think all the other pics of the blue hell or hidden interior were taken ?
Almost every were token by using cheat decoders or mods..
its the true & u know that

Marcus summed it up perfectly in his last post. No matter how useful your videos are, they MUST fit within the policy. Your videos contain mods, which puts them in breach of the policy. There are no two ways about it, ALL users must abide by the policy and ALL images and videos on the Wiki must abide by the policy guidelines. And for the record, I do not own modded games and have been able to access Blue Hell, as it is a glitch and not a mod. Sam Talk 15:18, June 17, 2015 (UTC)

Not all of them needs a modded game to do that. Besides, saying that we are annoyed of your content is a disrespectful way to deal with us. We are only applying policies because not everyone is able to mod a game, like me. Sorry, but policies are policies.

Your videos you are uploading are breaking our policy in numerous ways. For a start, the videos are featuring modding or glitching as a major aspect and target of the video. Also, when inserting videos into articles, please type when in source mode, under the file, to stop other text below the video wrapping itself around the video box.
Also, please don't use the wiki as a place to release your anger on us, and please improve how you word paragraphs and be careful how you talk to other members of staff here. And please don't make pathetic excuses about our apparent annoyance - this is not the place.
And finally, please sign off your messages by typing four (~) after the text. Thank You.

I would recommend you remove the videos from the pages ASAP, or else you will find yourself facing another block. If you do not remove them within the next 30 minutes you will be blocked. Thank you. Sam Talk 15:32, June 17, 2015 (UTC)

allright guys may i fall out, but just give me a reason y content with mods r not allowed

i mean for example some hidden interiours of san andreas, they were also recorded by using chaet devices

The reason is because this Wiki documents the games as they are naturally created, so in their "stock" form essentially. With regards to remnants of mod content, the policy was only amended in March this year (I know, because I was the one who advocated for the change) so some articles, especially minor ones which haven't been edited for a long while, may contain mod content. Sam Talk 15:52, June 17, 2015 (UTC)

A start would be removing the videos from the various pages. If we hadn't have had this recent discussion you'd have been blocked by now, so you've got a reprieve for now. Sam Talk 16:27, June 17, 2015 (UTC)

When I got back home, I left him the first message advising him to remove the videos at 3pm UK time. He wasn't blocked until 5:55pm UK time, a gap of nearly three hours. If he had removed the videos as advised instead of (for want of a better phrase) "kicking off" then this would have been avoided. The reason I gave him the chance to remove the videos himself was because if he had done so then it would have been the end of the matter, instead of another user having to become involved and remove them for him (thanks 558). Sam Talk 23:04, June 17, 2015 (UTC)

ye u told me but, would u remove contents when ur not sure if they violate the policy ?

You had time to reply here after SJWalker told you to remove the videos. You were given plenty of time to do that actually, much more than 30 minutes. I've added the block notification in your talk page, since I forgot to do it yesterday (sorry for the confusion). DocVinewood (talk) 14:23, June 18, 2015 (UTC)

Retrieved from "https://gta.fandom.com/wiki/User_talk:MrGTA500?oldid=801229"
Community content is available under CC-BY-SA unless otherwise noted.