Dan, the man, Happy 30th Birthday. May all your wishes come true.

BTW, I came with a cake: 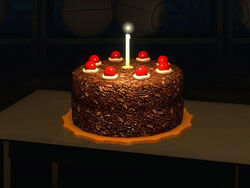 Happy B-Day from me too!

We have an article for the standard police cruiser but I'm thinking because the new model that we've seen in the Franklin trailer is based on an interceptor unti and features similar styling elements we should create a new article for a Vapid Inteceptor Unit. JBanton (Talk | Contribs) 14:46, May 1, 2013 (UTC)

Hey, Dan! I was thinking of re-applying for Adminship, since Bob became inactive and it also passed a while since my last one. The Tom said he agrees. :)

Also, I sent Bola a message. He seems to be busy with the Spanish wiki, but I think we will have the wiki background soon.Dodo8 Talk

I don't want to look desperate, but what about WinterMoon? I never seen him editing or contributing to the community noticeboards. I'm just so frustrated because I sit here and edit the wiki everyday and cannot be promoted, while others (WinterMoon) are admins and they don't contribute at all. :( Dodo8 Talk

I checked his contributions. He edited today. Sorry. Can you make an exception? Promoting me to admin isn't like there will be a new staff member. Just a promoted one. Anyway... I won't argue, you'll say I'm desperate.Dodo8 Talk

I thought that I'm active everyday and WinterMoon contributes once a week, so I told Jeff that. It wasn't a good idea, I don't know why I said it (probably because I was frustrated). Then he repplied that he won't support my next bid because of this.I said sorry, but I think he's mad on me. I've been very sad yesterday, but now I'm fine and ready to add more info about GTA V! :) Dodo8 Talk

Hello, are you looking for a sysadmin to manage this wiki? by manage I mean fix all technical problems etc. I will not play the role of admin, I will just be a person with admin rights(I need them to access admincp so I can anything if needed, bureaucrat rights are preferred as I can manage users as well). I was a rollback on the Avatar, ex-admin on the Half Life wiki and the current admin on the Big Bang Theory wiki so I have more or less experience with how this wikia operates. Sysadmin/webmaster is my expertise and I've been in the business for the past 3 or 4 years.

Do you have proof its fake??

I don't want to be nosey, but that's not "fake", more like "speculation". From what we seen from the trailers, the Lost operates mostly in Sandy Shores, not Los Santos.Dodo8 Talk

Hi Dan! I just deleted a page created by a user and looking at it gave me an idea. If you look at the red dead wiki, they have a part of their Wiki where users can create a Posse, where other users can decide if they want to join. With GTA V's release just around the corner, I think it would be good if we had something like the Posse pages on our wiki, but they are crew pages instead! Message me back on your ideas! VaultBoy Tom (Talk to me this way) 15:48, May 19, 2013 (UTC)

RE: Promotion for Patroller

Hi hope you are ok, I'm thinking about applying for Promotion as a Patroller, as Bob.cutlass2 became inactive and was wondering if you could please let me apply on the Promotions page. Cheers Instulent (talk) 16:20, May 26, 2013 (UTC)Instulent

Instulent keeps mocking me and insulting me on chat. He also said something about Mikey which I am assuming he will power abuse for Instulent. —Preceding unsigned comment added by AutocratOfKlaise (talk • contribs) Please remember to sign your talk page messages with ~~~~.

Hi, About the thing above, I bring proof that Autocrat is the main one behind this. (see where he says 'Insult me') image removed - Jeff (talk|stalk)

Hi, I looked at the screenshots. I see two uses fighting over what appears to be absolutely nothing, and I see that one of them hasn't been doing anything at all except arguing in chat. Instulent banned from chat for 3 days, AutocratofKlaise banned from chat for 2 weeks. Jeff (talk|stalk) 01:38, June 13, 2013 (UTC)

About the ideas. You're more active than WM. A lot more. I always see you discussing on the Community Noticeboard and on the Promotion page. You always respond fast to your messages. You and all the other bureaucrats are doing a great job. You don't have to edit articles, a b'cat's role is to manage the Wiki, basically. In WM's case, he should both be aware of the vandals on the wiki and also edit articles, which he doesn't. That's all.Dodo8 Talk

Hi Messi, actually I corrected the word because it was marked red in the source mode, don't care about it and don't think it's a big mistake, the word neighbourhood is actually at least 5% from the grammar errors that I corrected in the Wikia. BTW the two words neighbourhood and neighborhood are two correct words so no problem. --Thomas0802 (talk-Edits) 18:09, June 30, 2013 (UTC)

Yes, you're right, but I didn't know it, the most important is that no grammar error has been committed in the pages. If the two words are right so there's no reason to worry about it :)

Hey, Dan. I'm sorry for overreacting on WM's demotion. Nobody here on the wiki has anything against him, but as Mikey said " And as an admin, you have to be active so you can keep a watchful eye on the wiki." I have nothing against if he will stay as an admin. Sincerely, the only reason I supported this idea is because I'm.... an idiot. If it wasn't my behaviour, probably I would have been an admin right now. I'm the only responsible for my failed requests. I just hope the patrollers will get a chance to be promoted in the near future, wheter is me or anybody else.Dodo8 Talk

Yes, but his words are true. You know what? Let's just promote a random guy who never visits the wiki. A good idea, huh? Let's just end this conversation.Dodo8 Talk

If he would know about the demotion I don't think he would just sit there without saying nothing, that would prove that he is not there. And since I joined the wiki I never seen him contributing to the Community Noticeboard or Wiki's problems.Dodo8 Talk

Good! That's what I was waiting for. Couldn't you say that from the start so we could all stop fighting? If he would also contribute to the Community Noticeboard then there would be no reason for his demotion.Dodo8 Talk

Hi there, in about twenty-four hours time I'll be leaving on a five week holiday. I'll not have Wi-Fi access because I would like to save some cash for GTA and a new HDTV. I may still be able to use the internet via mobile, but my access to editing could drop to minimal at best. I'll try do my best while away and then return to business as usual when I return to the UK on 1st September. JBanton (Talk | Contribs) 10:32, July 20, 2013 (UTC)

I got a homework that I need to finish till the end of the vacations. It's about islamism. I searched it but I can't find the right answer for it. Like you're an admin in the Islam Wikia I gotta ask to you. In which year was the Kaaba built? Thanks. --Thomas0802 (talk-Edits) 13:48, July 21, 2013 (UTC)

Messi, we're obviously going to agree to disagree on the block you gave, me but I'm going to say my piece. I went on Jeff's talk page in the first place because I saw he was talking behind my back to other people. So I defended my name and since I found out I had a checkuser done on me I was going to comment on that too. I apologize for calling your actions disgraceful, but I am offended that you went to the length to see if I poses two accounts. It just shows that you do not trust me even though I've been on here almost a year. And when I said "if you have something to say, say it to my face", it was ment for Jeff as he was saying that I was going to be demoted to others. I don't like my name being brought up, especially when it's not to my face. I'd just like to end this feud Jeff has with me, and I've already tried by messaging him to put the WM demotion thing behind us. Boomer8 (talk) 05:19, July 22, 2013 (UTC)

Remember that time on Bully Wiki that all the users added a bunch of pointless categories and we ended up having to delete them? I'm starting to think we need to do some category culling here on GTA Wiki, and maybe come up with some sort of rule about creating categories to keep this nonsense from happening again. Jeff (talk|stalk) 01:54, August 4, 2013 (UTC)

Retrieved from "https://gta.fandom.com/wiki/User_talk:Messi1983/Archive_8?oldid=465091"
Community content is available under CC-BY-SA unless otherwise noted.