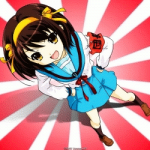 how do you get the userboxes? —Preceding unsigned comment added by wonderwaffle (talk • contribs) Please remember to sign your talk page messages with ~~~~.

You may want to take a look at "Grand Theft Auto: San Andreas", the chronology of events table next to the "Game Information" section. Some of those dates seem to be out of order.

Well I am interested in becoming one of the staff, but I still need to learn more and I'm a new editor. Oh and Happy New Year Haruhi Suzumiya. ExtremoMania 9:19 PM January 1, 2012 (UTC)

It looks likely, have a look at there edit patterns and there writing style and see if they are similar to the other Edrick's. Tom Talk 16:23, January 10, 2012 (UTC)

I think he was the 69niner kid who vandalized an administrator page in LA Noire Wiki. ExtremoMania January 31, 2012 (UTC)

You mean you're gonna send an entire army from other wikia to unite against vandalizers and proxies? ExtremoMania 10:39 PM January 31, 2012 (UTC)

Maybe we should ban users who has not yet created an IP address, but I don't think they cause problems, but that was my suggestion. ExtremoMania 10:48 PM January 31, 2012 (UTC)

That they have not yet created a user name account and instead was a numerical IP address. ExtremoMania 10:54 PM January 31, 2012 (UTC)

Must never come back. He must be block from the entire wikia and other wikis and must be at full alert when he continues to bug in. BTW what do you mean "same as you", don't understand? ExtremoMania 11:45 PM January 31, 2012 (UTC)

Ok thanks I have to log out for now, but I will return by tomorrow in order to ensure security in this wiki. ExtremoMania 12:02 AM February 1, 2012 (UTC)

I have just maded a danish GTA Wiki, and I think it'll be bettter than the danish wiki you linkes to at the main page.

Hey Haruhi. Because this wiki gets so much traffic and we need active users, there's currently a policy that if an admin is inactive for 3 months, s/he has the administrator powers removed. They're allowed to run again if they decide to be active again and if there's an open spot for an admin. I don't know if you're off wikia or just editing wikis that aren't this one so I thought I'd let you know. Your last edit here was February 27th which means if you're not back by May 27th we'll have to deadmin you. Jeff (talk|stalk) 06:40, April 26, 2012 (UTC)

You've been demoted to Patroller per the reasons stated by Jeff. If you wish to become an admin again you can request adminship back on the GTA Wiki:Requests for Promotion page. Messi1983 02:12, May 27, 2012 (UTC)

hey haruhi :)  who can write Beta Releases admins or members sorry for writting like this

It's not a glitch, it was suppoused to be in LS, I have an extract from GTA SA's main.scm

actor $PLAYER_ACTOR in_zone 'SUN'  // Temple (Checks if the player is in "Sunny side which was renamed to temple even in the comments that they have left.

If that's not convincing enough if you search for "SUN" in the info.zon (cordinates for the zone text that comes up in the bottom right corner)

these are all cordinates of temple's zone.

If THATS NOT CONVINCING ENOUGH get a .gxt editor and search for the "SUN" Name and it will return temple.

Umm, Haruhi has been inactive for more than two years.

Retrieved from "https://gta.fandom.com/wiki/User_talk:Haruhi_Suzumiya?oldid=594107"
Community content is available under CC-BY-SA unless otherwise noted.