Hi, welcome to Grand Theft Wiki! Thanks for your edit to the User:Gtaunited page.

I done this because it is a breech of rule 6 of the wishlist "Do not add pictures or headings". This is because everyones suggestion is treated equally and we can't really have people trying to make theirs "Stand out" if you know what I mean. I will restore the edit and I will trust that you will remove the headings from it. Chimpso (Talk) 09:47, July 6, 2010 (UTC)

I was just saying the full rule (you did not add pictures, so don't worry about that part). As explained above, headings are more attractive to that eye and draw attention to the wish, as everyone wish is treated equally this is not on. Please remove the headings from your suggestion. Thanks. Chimpso (Talk) 09:53, July 6, 2010 (UTC)

Could you please stop making this edit to the Grand Theft Auto: Chinatown Wars page. Most DS games are G/PG rated and aimed at children. Chimpso (Talk) 10:11, July 6, 2010 (UTC)

When the PS2 was created it was targeted at all ages. When the DS was created, Nintendo aimed it soley at Children, hence the comment in the article about so. Chimpso (Talk) 10:16, July 6, 2010 (UTC)

Not so, if you go to shops now-days and look in the DS section, all the games will be G/PG except GTA Chinatown Wars which will be MA. I think the only reason Nintendo wanted GTA to make a game for them so much is because that their rivals (Sony and Microsoft) are doing far better with their GTA games. Chimpso (Talk) 10:21, July 6, 2010 (UTC)

As I said, not all but most games are directed towards children. This is bcause Nintendo primarily creates childrens games. Chimpso (Talk) 10:27, July 6, 2010 (UTC)

Well at the shops here, that was my situation in several shops, all G and PG games and only Chinatown Wars as MA. It is most likley diferent in other countries. Chimpso (Talk) 10:35, July 6, 2010 (UTC)

Creating a page about all the vehicles in GTA IV and its episodes would be pretty much useless. There are seperate pages for all three games, so theres no point in mentioning the info again. All it takes is a quick type in the search box to find the respective games vehicles. Chimpso (Talk) 11:44, July 6, 2010 (UTC)

Here is a discussion about the matter on another staff members talk page. Everything that needs to be said can be found there. Chimpso (Talk) 11:50, July 6, 2010 (UTC)

Can you please not create "Vehicles in GTA IV Era" again? I gave you a link to a discussion explaining why we don't need a page like that, which you obviously did not bother to read. We don't need that page, all the vehicles are listed in Vehicles in GTA IV, Vehicles in The Lost and Damned and Vehicles in The Ballad of Gay Tony. Creating a page about all three is just repeating the information of the three articles, and a page like that is pretty much useless. Chimpso (Talk) 12:27, July 6, 2010 (UTC)

The subway is static in CW, it is just fast moving texture. The Police Maverick in CW and the helicopter both link to the same article, and bulletproof vehicles are just special types of their normal vehicles, not seperate ones. Chimpso (Talk) 03:48, July 7, 2010 (UTC)

I did not create that article (my edit was to add the proposed deletion tag, as that article is just duplicate information of the Special Vehicles article). And I have already explained why you cannot create "Vehicles in GTA IV Era". Chimpso (Talk) 04:00, July 7, 2010 (UTC)

If the page is nonsense/irrelevet/not needed then it can be deleted straight out. But sometimes even admins are not sure and simply propose the article be deleted. Then, when an agreement is reaches, the article is deleted or the delete tag removed. Chimpso (Talk) 04:28, July 7, 2010 (UTC)

Due to the fact that you re-created "Vehicles in GTA IV Era" under the name "Vehicles in Episodes from Liberty City", I am giving you a warning to not create these pages again. You have been asked twice above to not do so, and you have ignored me. Please do not create this page again. Chimpso (Talk) 06:24, July 7, 2010 (UTC)

I have explained why this page cannot be on the wiki. Discussions in Talk:Vehicles in GTA IV explain why you can't include the DLC in the list. The link to a topic I gave you above also explains why the page cannot be created. Chimpso (Talk) 06:40, July 7, 2010 (UTC)

All these requests have been denied with valid reasons. First of all, if you added them, then people won't know what vehicles you can drive between games. Also, there is no point in creating "Vehicles in GTA IV Era" people can easily look at Vehicles in GTA IV, Vehicles in The Ballad of Gay Tony and Vehicles in The Lost and Damned an agreememnt has already been reached by several staff members that this page should not be created and why DLC vehicles cannot be included in Vehicles in GTA IV. Chimpso (Talk) 06:48, July 7, 2010 (UTC)

That sounds more like an excuse then a valid reason. I have a very slow (or slower then most) dial-up connection. I can load all three pages in a few seconds, as they are only text. Merging the three together would take the same amount of time to load, if not more. Chimpso (Talk) 06:54, July 7, 2010 (UTC)

Due to the fact that you re-done this edit, I am giving you a final warning to not make these edits again. If you continue to make them then I will have no choice but to give you a block from this site. I have told you far too many times. Chimpso (Talk) 11:14, July 22, 2010 (UTC)

Last time I checked, you actually can ride on the top of the tram. It is also considerd a vehicle by the game. Please do not remove it from the list again. Chimpso (Talk) 05:58, July 24, 2010 (UTC)

The helicopter itself is not a modification, only the way you acsess it. If there was a way to enter the helicopter witout mods, it would function the same way as you acsess it with mods. We have had this discussion before, it is classified as a vehicle by the game. Chimpso (Talk) 06:36, July 30, 2010 (UTC)

About the car thing

yeah, but SA cars were all just shapeless blobs, GTA4 cars are more detailed and varied. AND there are no combine harvestors because that would be stupid in Liberty City, like in real NY Delo19xcrowbarx 07:11, August 3, 2010 (UTC)

I think the list of cars is great. Every vehicle on there should be in GTA V. And about the harvester and other farm vehicles, it shouldn't be in Liberty again, ad there should be farms in GTA V. That is just a perfect list of vehicles for grand theft auto.Evan Brown 07:01, August 4, 2010 (UTC)

I have already asked you before not to make your wishes "Stand Out" and I have removed your suggestion.

Also, you broke a clear rule of the wishlist by asking users to respond.

Here was your wish, I decided to move it here:

A Complete List of Vehicle that should be in GTA 5, Please Coment

Due to the fact that you have redone several edits on the Vehicles in GTA IV page which I have asked you many times not to make, I am blocking you for three days from this wiki. I hope that when you return you will not make various edits when you have been asked repeatedly to stop. Chimpso (Talk) 02:15, August 10, 2010 (UTC) 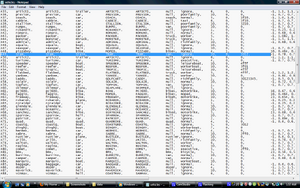 All the other categories you added were just extending the previous ones:

The ones that were already there are on the left. The ones which you just split them into are on the right.

The wishlist is something minor anyways. In truth, we don't even need it here. Splitting it up would just create a dozen pages that need archiving, cleaning up and being watched. Chimpso (Talk) 03:58, August 16, 2010 (UTC)

I fail to understand your thinking. Grand Theft Auto IV has awesome Physics and Graphics, which is part of gameplay. The combat system has been improved, and improved very well. The guns are awesome, they don't have that "Over the top" Guns from San Andreas, but meh, I don't mind.

Driving System: It's f**cking awesome it makes me cry, The realistic driving is pretty awesome, gets some few minutes to learn well, but you learn fast.

Guns: Now these, is what I'm really proud of, I really love the sound of the guns, and the impact they do.

Story: Awesome story, probably the best on any GTA ( My opinion )

Cover: This is also where the game shines, you can cover where you please, you can blind fire or lock on to a target and shoot, making you vulnarable

City: It's really cool to see the city at night, it feels like your in the game.

Now on to Saints Row 2, I bought it on steam, and the last time I played it, was the same day I bought it. You know why? The goddamn driving system.

Driving System: I dunno what to say, it just plain F**king sucks. I can't play the game without crashing into everything, or go through a metal thing.

Guns: Meh, they are ok. But seriously, the heart of a shooting game is the cars, and if the handling and all that shit has failed, It makes you go: Damn, this game could be a good game if it wasn't for the driving system.

Story: Haven't did it, but I heard it was cool, but then again, the same reason I didn't like is over there ^

The driving system is so bad, I have to give it a cathegory.

Driving System: It f**king sucks, the worst thing of this game. Now, imagine your going to a checkpoint, you try to drive, but it's too damn fast and the handling sucks.

I didn't just review physics and graphics. I reviewed The guns, which, are awesome, I do admit, but Yeah, I didn't review the vehicles.

But I didn't review anything or I would just sound like a broken record saying "But then again, the driving system sucks" Which really, really does, which ruined the fun of the game, on the other hand, GTA IV has a unique style of driving, the guns are ok I love them, infact, Stunting in GTA IV is awesome, The story is awesome, should I go on? IanMontes 23:04, August 16, 2010 (UTC)

Too bad they don't show how shitty the driving is, and well, playing bowling is pretty cool, Watching TV is awesome, the shows are funny, which they are showing rockstar's humour, it's also surprising how they didn't mention that if you don't wanna do that, don't do it.

Aswell they might have said "We have a bad story! We also put sucky driving in our games! While they have Hard missions, which are challenging, who likes that!? And they also have awesome graphics and physics, and also, awesome story and guns!" Now excuse me while I take a crap in my Saints Row 2 Disc. ( Yeah, I have steam and disc version. )

Retrieved from "https://gta.fandom.com/wiki/User_talk:Gtaunited?oldid=258137"
Community content is available under CC-BY-SA unless otherwise noted.