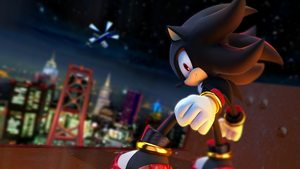 Welcome to my talk page, leave your details, talk to me if you need any help, create a section about the topic, always sign at the end of your message and please be polite.

I read the IGN article (this one) and there is no mention of Kuruma.

Where does the "Hind" come from too, by the way? I know it was a cut helicopter but how it is known that it's the Hind? Gonna leave this one, but just want to know where did it come from. (If it is said in the video, my bad. I have no sound on PC so I can't listen to the trailer)

Hey AndreEagle. I dont think the Unnamed APC is an APC. It more looks like a big truck to me with a mounted gun than an APC. Like APC stands for Armored Personal Carrier. Examples of APCs would be the APC and Saints Row's Bear. Or you could look up APCs on Google. It isn't an APC to me and should be renamed. What do you think?

I agree, I think it looks more like a Dartz armoured SUV. That said, the page is always going to need a rename as soon as someone creates a page with "unnamed xyz" on the basis of teasers with no evidence. So we might as well leave it as it is until there is evidence of an actual name to change it to.  smurfy (coms) 03:29, December 18, 2014 (UTC)

Well the FBI Truck isn't an APC. It's more of an armored SUV like the Unnamed APC is. When I saw the page, I swear Rockstar brought an APC into the game, only to find an armored truck -_-. But anyway, knowing that Rockstar changed the designs of almost every returning car (some of which ruined the beauty of the car)  I wouldn't be surprised if the unknown attack helicopter is the Hunter. It could be the Hind but who knows. I just feel it's a changed design of the Hunter. I'd be upset though about it because I think the Apache looks more sporty and deadly than the Hind.

If the Unnamed APC isn't fast and doesn't shoot rockets like the original APC did, I'd be upset. Because the original APC was boss and it should've been added to this game, especially in the DLC. But I'm so ready for the Hydra cause I never drove it nor the Hunter in San Andreas. I'm ready for both but I feel we have to invade Fort Zancudo for these vehicles :(.

Well I can't say I love the Jetpack. And GTA V does have some rather unrealistic Saints Row like things in it, such as Peyote Plants. I'm a fan of the Jetpack and I want it to return but nothing do I want more in GTA V than some new cheats and the APC. Then if they'd bring some other Beta cars in the DLCs like the Military Patriot, Lokus, first gen Schafter and Feroci then GTA V would become my favorite GTA game.

Okay I agree with the Tampa, Contender, Kart, Skateboard, Vortex, Yosemite, Zombie, Clover and Savanna, Turismo, Meteor and ZR-350. Plus the Moonbeam will make Los Santos look more alive. But now that GTA V has so many vehicles, some of which like the Dilletante are pointless and lame, I don't even know how many more vehicles will show up in the game before they begin planning GTA six. But I totally agree with you man. Good vehicle choices. Also I don't know why but I miss the Enforcer too...

The Dilletante definitely needs to be removed. Also, in GTA VI I don't think many semi trucks and country vehicles will make a return because Vice City in the 3D Universe had no highways (unlike real life Miami) and it only has a small trailer park in Vice City Stories. But you never know because if Rockstar makes GTA VI in Vice City, they're gonna make an extra location. The new location could be based off the Everglades, Key West, or even Orlando. Who knows.

I think the Roosevelt and Dumper would be in GTA VI but the others I can agree with. Also, I'd suggest you play a game because sometimes watching videos leaves out what truly makes the game fun. I'll tell you straight. I got disappointed watching Saints Row 4's trailer an Far Cry 4's gameplay, but Saints Row IV isn't a bad game at all, it just doesn't fit into the Saints Row category (same with Saints Row the Third). Also, I can guarantee you as much as Far Cry 4 looks like Far Cry 3 in terms of gameplay (almost copied and pasted to me), I bet you it's gonna be an awesome game to play. So basically, I'd say try the game first because some videos can make you think the game sucks when it's actually pretty cool.

But honestly, Watch Dogs' train is way more detailed than GTA IV's subway. You can ride in it from station to station and plus you can shoot in it and board different train cars while it is moving. Plus once you gain the ability to hack the train to stop and start moving, you can cause chaos in the trains while wanted and will never get the police to catch you. So basically, you can hack the train to keep moving every time it stops at a station while wanted by the police so they can't reach you. That's why I said play the game because Watch Dogs has some awesome hacks. You can hack transformers to explode causing a blackout, and you can never get wanted by cops for stealing a car once you get a hack to disable its alarm. There are also more hacks and activities to do in the game, such as a drinking minigame.

I have a feeling my outdated sig's gonna need a makeover. "Don't worry,--

I've added the Skylift to the list on my user page - if you notice any more that aren't on my list, feel free to just edit them into my user page rather than leave a request on my talk page.  smurfy (coms) 08:05, December 18, 2014 (UTC)

Hey I have one doubt. Try to clarify it in your free time but why do we have pages for crews on rockstar social club. I mean it is not bad or anything but why include it cause it might not be useful as to say. Just dont get mad if you are also with a crew featured in the wiki.

And One more doubt do you know anyone who has the enhanced version cause i saw that two weapons the stun gun and the railgun are developed by coil. We come to know this by the inscriptions on the weapons as seen in the enhanced version. And try to ask around would you we might be able to get a few more manufacturers. Thanks man.Shadow Polaris(Talk) 14:16, December 20, 2014 (UTC)

Haha Nice man. Congrats on the ps4 and one more thing in the trailer section for gta 5 the online trailer doesnt work so i think we need to replace it or something do you know how. Sweet did you also get gta 5 and what are the games you are going to buy,Shadow Polaris(Talk) 14:48, December 20, 2014 (UTC)

you saw dying light it seems interesting like nice go watch it if you didntShadow Polaris(Talk) 15:02, December 20, 2014 (UTC)

The redirect page is locked, for reasons I do not know why. Patrollers are not able to edit on locked pages, only admins or bureaucrats can. So unfortunately, I cannot help you on that. You should try contacting a higher-up to unlock the page or at least fix it themselves. Like I said, patrollers cannot lock or unlock pages. Carl Johnson Jr. (talk) 17:04, December 21, 2014 (UTC)

He is acussing me of not lisencing images correctly, when i did, i lisenced it as 'made it my self', if that isn't correct, why is there an option to put it!!!

I think Rain went a bit mad on removing trivia, he's removing 'coincidences', but some of these 'coinicidences' are actually really interesting, hes removed up to 5 huge facts per page. i think we should protest! :p

OMG, I didnt even realize i put that! LOL!! XD

I'll see with Tom if we can create a new usergroup for users to allow them to delete and rename images. It would be cool for users like me Smurfynz or CJ Jr. who really care about that image policy. And that'll allow also to cleanup a bit this dump of images the Wiki has.

That shark sculpture image wasn't too badly named IMO, you could have just edited in the licence template in the source of the file page:
== Licensing ==
{{gtav screenshot}}
Anyone can do this for any unlicenced image right now. What we (as users) cannot do is what Rain has suggested to Tom, and that is rename or delete images. I think it would be a good idea to extend that to the patrollers group (might even encourage me to apply for the job then).  smurfy (coms) 22:54, December 22, 2014 (UTC)

The boar at sonar docks re-spawns. I chased one over the cliffs and turned around to come back to the road and it was there in its spawn spot again.

But yeah, there are quite a few species that don't like to hang around and pose for photos. I had a lot of trouble with rabbits.

Retrieved from "https://gta.fandom.com/wiki/User_talk:AndreEagle17?oldid=729233"
Community content is available under CC-BY-SA unless otherwise noted.