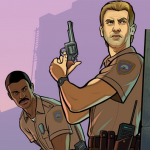 Important: Due to a family tragedy, I might not be fully active for an indefinite period of time.

I first started playing Grand Theft Auto: Vice City in the year 2003 at the age of 8-9, and I enjoyed it very much due to the graphics (which were exceptional for its time) and its lack of foul language: in fact, dialogue-wise, it still remains my favorite Grand Theft Auto game due to its lack of bad language.

The second game that I played was Grand Theft Auto III, which I also enjoyed greatly, but not as much as GTA: Vice City, perhaps because of the poorer graphics and lack of aircraft.

The third game that I played was Grand Theft Auto: San Andreas, which I liked the graphics of, but never really enjoyed that much due to the frequent use of foul language.

The fourth game that I played was Grand Theft Auto IV, which I again enjoyed the graphics of, but never played the story of, for the same reasons as GTA: San Andreas, though I may come round to playing the story eventually. The Multiplayer modes were enjoyable, but rather limited, and I felt that the Freemode was rather lacking in terms of things to do.

The fifth game that I played was Grand Theft Auto V/Online, which is by far my favorite Grand Theft Auto game to date, due to its excellent graphics (even on older platforms) and excellent Multiplayer. However, I have yet to play the story aside from the Prologue (which I was obligated to complete in order to play GTA Online) and Franklin and Lamar (which I completed on a friend's Xbox LIVE account on the Xbox 360 in order to unlock returning player content for him on the Xbox One), for the same reasons as GTA: San Andreas and GTA IV, but again, I may come round to doing so eventually.

My name is Konan T-A Lim, I am currently 24 years old, Singaporean-Chinese by heritage and I was born and live in Sydney, New South Wales, Australia. I was born on the 8th of November. Unfortunately I do not yet know how to speak Chinese fluently, nor can I yet read or write it. However, I am very good at speaking and reading and writing English, to the extent that some call me a "walking dictionary". However, my father, who was my principal English teacher when I was a child, is even better than I am.

I consider myself to be a person of maturity and honor, and I always strive to maintain this maturity and honor. As such, I always try to maintain my dignity in any and all situations, even when I become angry. I generally have a "no nonsense" attitude, but I will happily adopt a jovial demeanor when the situation is appropriate, and I always enjoy a good joke when the time is right, so long as the joke is not overly vulgar.

As I have mentioned in my GTA history, I am averse to foul language, in particular the "F" and "C" words, and I would greatly appreciate it if others would mind their language around me.

I am soon to study law, as it is my intention to become a lawyer.

I have a keen interest in aviation, information technology (I.T.) and medicine - in particular life extension - sciences.

I first came to the GTA Wiki on a whim while looking at information on the Call of Duty Wiki for the AV-8B Harrier II: I saw the aircraft, and it made me think of the Hydra, so I decided to search for the Hydra across Wikia, which led me to this wiki. I noticed that several of the pages on this wiki were worded with atrocious spelling and/or grammar, and I decided to start editing pages to fix this. Since then I have been a fairly regular editor and, more recently, policy enforcer, Patroller and Administrator.

My Friends and/or Helpful Users

I have decided to add this section only after much consideration, as I do not like to show favoritism on this wiki. Please note that if you know me but are not on this list, it does not mean that I do not like you: more likely, I simply do not know you well enough, and I may add you to this list at a later date.

Trivia (Anyone can edit this section, but please do not publish anything rude)

Retrieved from "https://gta.fandom.com/wiki/User:TAlim_1994?oldid=1184489"
Community content is available under CC-BY-SA unless otherwise noted.