aka Rank I of the Discord Organization XIII

I am currently a semi-active user here. I do occasionally check in here, and I am always active on Discord, so if you need anything that I could possibly help you with, you can contact me through there. Currently, I'm mostly active on other wikis such as the Call of Duty Wiki, the Nazi Zombies Plus Wiki, and the Marvel Cinematic Universe Wiki.

The designs of my two Grand Theft Auto Online characters, both wearing their "default" outfits.

He is a Caucasian male with a dark brown high slicked sides hairstyle, with dark brown eyebrows and a dark brown trimmed beard. His eyes were originally emerald green, but were changed to golden-yellow as a reference to the Kingdom Hearts series. He wears a black battle vest underneath a black light strike vest, and black combat pants with black flight boots. He also wears black woolen gloves. Physically, he bears a resemblance to Roach himself.

She is a Caucasian female with short dark brown hair and eyebrows, and hazel eyes. She uses full blusher makeup, prince of darkness eyeliner, and heavy lined matte lipstick. Both of her ears are pierced, and she wears chunky hooped earrings on both ears. She wears a small white frill blouse and black high wasted pants, both of which lack suspenders, as well as black strappy high heels. She also wears a silver CaCa Di Lusso watch on her left arm. While she has no real physical traits with Roach himself, her hairstyle has a similarity to his hair when it is grown out a bit.

Sunset FM is RoachTheIntelCollector's custom radio station created by Roach via Self Radio.

(*) next to songs means that they have been featured in a previous Grand Theft Auto radio station.

"Reality is often disappointing. That is, it was. Now, reality can be whatever I want."
―Thanos, Avengers: Infinity War 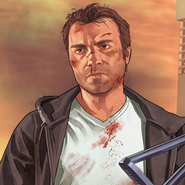 Retrieved from "https://gta.fandom.com/wiki/User:RoachTheIntelCollector?oldid=1183898"
Community content is available under CC-BY-SA unless otherwise noted.