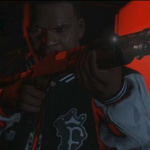 Hey, I'm Mikey Klebbitz. I'm 16 and I'm from Portugal. I like Grand Theft Auto a lot, so I signed up here.

This is generally a complete wiki, but I'm here to help it even more. I also have an account on Wikipedia, Youtube, Facebook and Twitter. I wondered about joining in at first, but after all I'm enjoying being here with lots and lots of people who enjoy a great series of games. Enough with the talk, though.

I've already contributed to complete some pages, made new ones and I'm hoping to continue doing so.

Need to talk to me? This way.

That's all for now. Read you around?

When I was 11 (around 2007), I used to go play videogames with a neighbour of mine. He had GTA III, GTA VC and GTA SA, for PC. He didn't speak English, so I had to play in Spanish, and I thought the games were really great, but didn't care for their name, just that they were Grand Theft Auto games.

So, in Autumn 2008, I was going through a store which I used to visit a lot (and I still do) , which had books, videogames, music, etc. , and I saw GTA Liberty City Stories. I asked my dad to buy it for my PSP, and he did (he didn't care too much for games, so he was oblivious to the fact GTA games are 18 years ranked) . At the same time, GTA IV was being released...

Later in January 2009, my mom bought me GTA San Andreas and GTA Vice City Stories for my birthday.

The GTA games I own

One of the things about GTA I like the most are the cars, specially the GTA IV Era ones.

But when I say I like the cars, that doesn't mean I don't go around the city driving super fast, wrecking every single car I drive (even if it is a rare one).

I also love riding helis all around town, and bikes as well. When I'm riding a bike, I usually try to go through cars on one way roads, at high speeds, like it is a car chase. And then I get dismounted. WASTED !!!

These are the cars I prefer:

Retrieved from "https://gta.fandom.com/wiki/User:Mikey_Klebbitz?oldid=741617"
Community content is available under CC-BY-SA unless otherwise noted.