Me in GTA Online.

Hi. I'm Andy Ashley, but you can call me Andyxdr. I was born in California in 1999 and my family lived with me there for nearly 8 years. In 2007, we moved all the way to North Carolina and we lived there for 6 years. In 2013, we moved to Texas. In 2019, I moved to my grandparents' house in California. The first GTA game that I ever played was Grand Theft Auto III. It was the only game in the series that I ever really played until Grand Theft Auto V when I started getting attached to the Grand Theft Auto series. I bought every game in the 3D Universe (except GTA Advance) for my PlayStation 2, and I also got Episodes from Liberty City for my PlayStation 3. I became an editor on GTA Wiki some time ago and I love GTA and I am happy to be a part of the Wiki of one of my favorite series of video games!

Pages about my favorite stuff in the GTA Series

As mentioned in the trivia, I like to come up with speculations. Since they cannot be written in pages, they will be written here instead.

Alderney is not featured in GTA CW in-universe explanation

In 2009, the state of Alderney suffered a terrorist attack. As a result, all bridges and tunnels were closed down for the rest of the year. Boats and helicopters were also forbidden to go anywhere near the state.

Luigi owned his club at the time of 1992, but when the Sindacco Family entered the city, they took over the club and renamed it "Paulie's Revue Bar." After the death of the club's manager JD O'Toole, Luigi got his club back and changed the name back.

Tommy never learned how to swim.

Pages that I've created or invented (not including redirects) 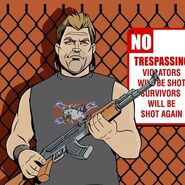 Andy's Wiki Staff pic when he was a member of the Staff. It is the GTA VC artwork of Phil Cassidy. It is also his User Avatar.
Add a photo to this gallery