Important: Due to college and a new job, I might not be fully active during this month.

Due to college, I will be offline between 18:00 and 22:00 from Monday to Friday. You may contact other staff members.

Welcome to my profile page. It maybe not be the best profile of GTA Wiki, but its nice and clean, and smell like lemon. (OK, maybe i just made up that last part)

Since you are here, I think you should stick around and enjoy my profile. But you can also go away and never return, I mean, its not like you should do everything i want, I'm just a guy talking to you through a computer not your mother. Anyway, back to my profile... 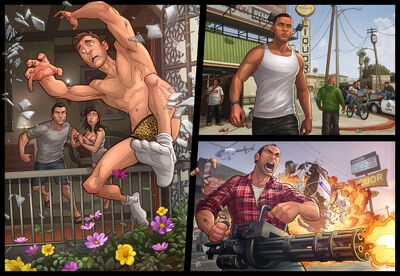 I'm from Brazil (the new homeland of Max Payne \0/), meaning that english its not my mother tongue, so if you find any grammar mistakes along this page, you know why. I have been playing GTA since the age of 7. My very first GTA was GTA III, that I played on the computer of a uncle. I loved that game like no other game that I have ever played and my parents ended up buying a PS2 for me just because of that game, later I also bought a Xbox360 just because of GTA IV. Looking this logic, you can probably guess that I will only get a PS4 or XBOXOne when Rockstar announce GTA 6.

Mike Lips Last Lunch When I first played GTA III, I was just 7 years old and this mission became a living nitghmare for me, I was unable to complete it! Seriously. I was a horrible driver in this game, so take Mike's car to the bomb shop and return to the restaurant was impossible for me, I either exploded the car or ran out of time. I almost quit GTA III. But one day, I finally managed to deliver the car to the restaurant in time, when I first see Mike going to his car and exploding inside of it, it was so satisfactory that everything that I have passed felt worth it. Everytime that I replayed that mission, I felt the exactly same satisfaction, so this mission ended up being one of my favorites in the game!

Plaster Blaster I just like how insane is the main objective of this mission, kill a man in a ambulance with his body completely plastered! I remember doing this mission for the first time and when I saw that guy drop out of the ambulance with all that plaster in his body I just laughed out loud. The fact that I killed him with a rocket launcher made it even more insane, I loved it!

Her Lover I know that this is not a main mission, but this is my list, so I put the missions that i want. Anyway, if anyone remember the Marty Chonks missions, they all basically consisted of picking someone and bring it to the dog food factory where Marty was, so he could kill that person. Except for the last mission, that is this one. Here you need to bring the lover of Mike's wife to the factory, when I did this mission I was already expecting to see Marty kill the lover like he did with the others, however, out of nowhere, the lover pulls out a shotgun and kills Marty like if he was nothing! It was so unexpected that I was speechless, and the most funny part is that the game lets you kill the lover after he kills Marty and take his shotgun! Pure old school GTA style!

I Scream, You Scream Another side-mission, what can I say if the side-mission of this game are so awesome? Like the Plaster Blaster mission, I just like the premise of this mission. Rob a Ice Cream Van, take the van to a gang meeting and activate the Ice Cream jingle (!) to attract the gang members to the van and then detonate the van! It's so silly and yet so joyful that it's impossible not to like!

The Exchange It's kind of predictable to put the last mission as my favorite one, but I really enjoyed this mission. This was my first GTA, so beating a game that (in his time) was so gigantic, was a really big thing for me. And I liked how the mission was, follow Catalina's helicopter until you get to the dam and then killing a lot of goons in the way through the place, and everything culminating in Claude killing Catalina by destroying her helicopter with a rocket launcher, it was so epic when I first played! So this became easily my favorite mission in the game.

Demolition Man This mission is exactly like Mike Lips Last Lunch! I got stuck in this mission during a long time, because the controls of the RC helicopter were horrible and there was a damn timer again. As time passed I got better at the controls and when I finally completed this mission, watching a building explode was never so good.

Publicity Tour I like the humor in this mission, the Love Fist members really made me have some good laughs while doing this mission. It's not challenging or complex in any any, it's just Tommy driving the Love Fist limo around the city in high speed so the car doesn't explode. But as I said, it's just funny. Not to mention that the premise is a reference to the movie Speed, and I love that movie!

G-Spotlight I know it sounds like a random mission, but this is really a underrated mission in GTA Vice City in my opinion. If you don't remember, in this mission Tommy must use a PCJ-600 to jump to the rooftop of one building to another, until he reaches a spotlight that he uses to promote the Candy Suxxx movie that his studio is making. This mission is really cool for many reasons:

The Job What a fantastic mission! The build up was really well done and the result is very satisfactory. I liked everything in this mission, the initial cutscene with Tommy explaining the plan, the clothes used in the heist, the tension and the climate inside the bank and the epic car chase against the police in the ending. It's just a very good mission.

Rub Out Now, why this one take the first place? Well, let me explain. Before GTA Vice City, the only GTA I have played was GTA III, GTA III it's a very good game, but there's something about it that I never liked: the fact that Claude does not become something during the game. He start the game as a mute gorilla who only take orders from other people... and end the game as a mute gorilla who only take orders from other people! He doesn't change! While I played Vice City, I was expecting the same thing, that Tommy would be just another servent to everyone in the city. But then, this mission happened. It was very simple: kill Ricardo Diaz. However, what this mission represented for the game and even to Tommy Vercetti was very complex: finally we are not being servents anymore. We are taking our own orders and doing what we want. Tommy did not kill Ricardo because someone say that he should do it, he killed Ricardo to take revenge on what he did to Lance Vance, he killed Ricardo because he wanted. And after this mission is completed, we receive as a reward his mansion, a symbol that we are finally growing in the city, that we are finally becoming our own bosses. And that's why this is my favorite mission in GTA Vice City.

Black Project The first couple of times that I did this mission, I never stoped to think how bizarre the concept of a gangster invading a high security governmant base to steal a jetpack was. But a guess this is what makes this mission so special... well, this and the freaking jetpack of course. Rockstar, wheres my jetpack in GTA V goddamned?!!

Vertical Bird And this one the gangster invades a hight security governmant base to steal a jet!! How bizarre. This one I decided to put above Black Project, because of the option to fully invade the base in stealth mode, (I love stealth games!) and that sweet ending in with we destroy the boats using the jet. Good times.

The Meat Business The atmosphere and tension in this mission are so great. To the first cutscene showing Johnny Sindaco's death after he sees Carl, to the entire shootout in the meat factory, with one of the enemys even using a chainsaw, it was amazing! Definitely stood among the mafia themed missions in Las Venturas for me.

Breaking The Bank At Caligula's The first big score in the franchise, way before GTA V existed! Solid amound of action and presentation, not much to say about it. Everyone played it, and everyone knows how awesome it is.

End of the Line Theres not much to say about this mission that have not already been said. It's just the greatest final mission in the entire franchise. It wraps everything in the storyline together, it delivers the right amound of action and tension and it gives this superb game the ending that it deserves. It still is my all time favorite mission in the series, and its gonna be hard to top.

My best works on Wikia