Upstate Liberty is the name given to the northern end of Shoreside Vale which normally is inaccessible during gameplay and is normally used as a background. The area could be considered the technical limitations of Grand Theft Auto III.

This area also appears in Grand Theft Auto Advance as a flat terrain due to the top-down perspective. This is also the limit of the game's map, and has an invisible wall to prevent the player from passing. Also, one of the hidden packages is located on the left corner of the map.

Lying behind the Shoreside Vale land mass are water patches and a gaping entrance into Blue Hell. There is also a small city block situated behind the mass in GTA III.

The backside of the dam. 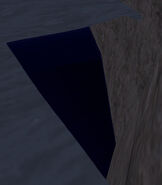 Closeup view of the hole in the corner of the mountain. Although it displays blue hell it is considered a water hole, and is invisibly connected to the strip of water above.

The patch of water above the hole. 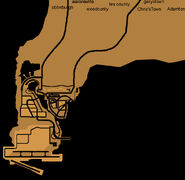 Map of the entire Upstate area in GTA III.
Add a photo to this gallery

Upstate is the hilliest part of Shoreside Vale. The hills are located above Cedar Grove as mentioned before. There are two layers of hills. The first layer is under the observatory. And the second layer is at the same level as the observatory although some of it stretches out above it. There is a steep rocky wall connecting the two, which acts as a wall preventing the player from roaming the second (and unsolid) layer. The wall also stretches around the western part of the hills near Cochrane Dam, and the western part of the hills. The first layer is solid, and the player can roam on. The second layer isn't solid. Located above the wall is an invisible field that blocks the player. It is worth noting that some of the hills on the first land mass can be used as ramps to jump onto, and through the second hill mass.

Around the upper-area of Cochrane Dam, the north-western section of the hills can be seen sheltering the water contained in the dam. The rocky parts of this section are solid but are normally not accessible. From certain viewpoints optical illusions can be seen which are results of incomplete draw graphics such as water jutting through the wall of the dam. Under the water a large entrance of Blue Hell exists. Unlike all of the other Blue Hell entrances, if the player falls in they will fall for a longer period of time as opposed to the normal amount of time.

Two road tunnels are located to the North of Cedar Grove and to the East of Cochrane Dam. The tunnels may be a clue to the actual entrance to Upstate. In GTA III the tunnels seem to appear to connect with each other. In GTA Liberty City Stories, the tunnels do connect to each other at an underground T-junction. Another tunnel branching off at the intersection leads to Upstate. According to the Lips 106 radio station, is mentioned that Carcer City is nearby and maybe, these tunnels lead these cities (Liberty City and Carcer City). However, the map of Carcer City doesn't appear in these games (GTA III and LCS).

The tunnels first appear in GTA III and are blocked off without much reasoning. The tunnels do not have any significance to the storyline. Signs, blockades, and an invisible wall at the front of both tunnels are seen blocking the entrance. If the players causes an explosion on the items, some items will fly by the explosion, but it will still be blocked. The construction signs aren't solid, which is why explosives don't affect them. The only solid part inside the tunnel is the small path in front of the pile of rubble.

In-game, it would appear as if these are under construction, as mounds of dirt, and construction signs are visible. The tunnels extends at least twenty feet into the hills before they come to a stop. Past this wall there is nothing. It would also appear that the tunnels connect to each other (as seen in the interior, however they don't). Also as seen through the radar they appear to lead up towards the city limits (edge of the gameworld) but they won't.

Upstate hills as viewed to the north.

One of the Upstate tunnels. (Upstate exterior) (Tunnel interior)

The tunnels on the radar. One ends at "Obbeburgh", and the other ends at "Garystown".

A tunnel testers sign.
Add a photo to this gallery

The two tunnels return in GTA Liberty City Stories but this time they are accessible and include traffic. They are in the same location; one in Cedar Grove, and one at the end of the Cochrane Dam. The two tunnels connect in the center where the Upstate name can be seen on all tunnel entrances. There is also another blockade planted here. The other side of the road appears to go uphill. This too is not solid. The edge of the gameworld is not present here but the blue hell entrances are. Unlike in GTA III the tunnel is located deep inside the hills instead of jutting out. Going under this road will result in the player falling in the water. As you can see in Liberty City Stories map, in Shoreside Vale, the upstate doesn't have anything, not even the names as in GTA III, because, this time, the radar shows only the map, exactly the same as the map menu. If you're going to Upstate direction, soon you will see the hills in the radar disappearing. Going further north, the player will start bugging, as like your car. There is, however, an obtainable hidden package close to the blocked entrance inside the tunnel.

Boundaries of the gameworld

Surrounding all of Liberty City is an area dubbed the borders of the "gameworld". This can be spotted usually as a light blue area behind the water (colors can change with time and weather, but usually it is the same colour as the sky). This is nothing more than the biggest "hole" in the game. It works just as blue hell does. It can be seen as such as when the player gets close to it they can angle the camera to a certain extent to which it emulates a "trail" effect. This area has no water and is void of any physical objects. It is also the area in which all physical simulations of the game cease. The atmosphere is still present in this area and low-textured birds can still be seen.

Venturing too far into this region can result in game instability and random crashing.[1] If the player attempts to enter it while commandeering a vehicle the game will likely "bounce" them back, but it might also crash in the process. The area at which this occurs are the names Aaronsville, and Garystown. Attempting to enter these names repeatedly in a short period will likely result in a game crash as they are too far north. In the PS2 and Xbox versions, the game will freeze but the radio still plays if the player is in a vehicle. In the PC version the game will crash, giving the user an unhandled exception error message. Trying to use trainers or cheating devices to avoid the game's "bounce" mechanism will crash the game once the player passes the game's boundary. This boundary differs between the three platforms. In the PC version if the player crosses said names the game will crash, but with the console versions the player can almost reach the light blue void before the game freezes.

Also, if the player approaches Upstate from the Portland side, and flies into the north-eastern hill mass their vehicle will disappear and reappear after a few seconds. The reason for the hills not being complete was the thought that no players can normally venture there. However in GTA Liberty City Stories, most of the hills actually have backsides (but are unsolid) instead of having large holes in the landscape.

Close to the edge of Liberty City in GTA III there are several names that can be seen on the radar: Chris's Town, Gary's Town, Adamton, Obbeburgh, Woodcunty, Les County, and Aaronsville, all of which were named after some of the programmers and developers of the game. To see these names the player would have to learn how to fly the Dodo and fly it behind the Shoreside Vale hills.

The fact that these are named as towns indicates that the gameworld may have been much larger in very early development, perhaps depicting a rural "upstate" area with many small towns, emulating Upstate New York. This is further evidenced by the map which shows the road tunnels and mainland north of Shoreside Vale, whereas the area behind Shoreside Vale's hills is entirely unpopulated. Technical limitations or simple abandonment of the idea may account for the absence of a populated Upstate.

The main mean of reaching Upstate in GTA III is by Dodo. Another way to reach it is the use of cheats in combination with the Rhino tank. The player cannot reach it by boat as there are invisible currents that cut off Upstate from the water around Francis International and Portland. However, in GTA Liberty City Stories, the inclusion of a floating car cheat allows the player to drive through the boundaries which would normally prevent boats from entering. Also if the player has obtained a Maverick they can use that to go past the boundaries, but not the height limit.

Retrieved from "https://gta.fandom.com/wiki/Upstate_Liberty?oldid=1241020"
Community content is available under CC-BY-SA unless otherwise noted.