View source
watch 02:56
Raise a Floppa - The Loop
Do you like this video?
Play Sound
For the brand with a similar name, see Up-n-Atom Burger.

No
“Republican Space Ranger Special, fresh from the galactic war on socialism: no ammo, no mag, just one brutal energy pulse after another.”
— Ammu-Nation and Social Club description.

The Up-n-Atomizer is a Raygun featured in Grand Theft Auto Online as part of the continuation of the Arena War update, released on January 1, 2019, during the Festive Surprise 2018 event.

The Up-n-Atomizer is a small handheld futuristic blaster, sporting a blue finish with a yellow coil as the barrel. When a shot is fired from the weapon, it will take on the appearance of a glowing coil before exploding in a small blue blast.

The Up-n-Atomizer is an interesting weapon; it fires a yellow glowing coil beam that explodes after a short time, or upon impact with a surface or object. The weapon features no traditional ammunition, rather it recharges its shot after two seconds, similarly to the Stun Gun.

The damage the weapon emits is not as strong compared to other explosive weapons in the game such as the Railgun. When a person is hit directly with a shot, it will send them flying into the air, and requires a few additional shots to fully kill someone unless it is a headshot. If a shot is close but doesn't directly hit the person, it will stun NPCs while having no effect on players. Firing it at a target that's too close to the player (or directly at the floor) will cause the player to fly into the air.

When a vehicle is shot, it will send it flying while dealing minimal damage. This can be rather useful against vehicles, especially ones that have become stuck and are unable to move otherwise. However, one downside to the Up-n-Atomizer is that it cannot be fired while in a vehicle. Using the weapon to dislodge a vehicle will still damage the vehicle to an extent and too many shots will destroy it.

The Up-n-Atomizer can also be used to knock down chain-link fences - including some (though not all) fences that vehicles cannot knock down. 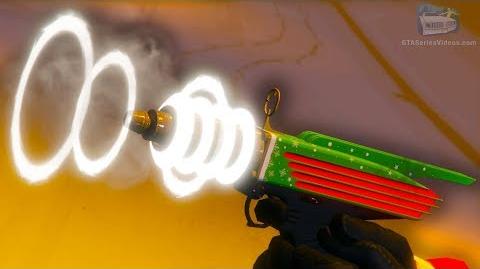 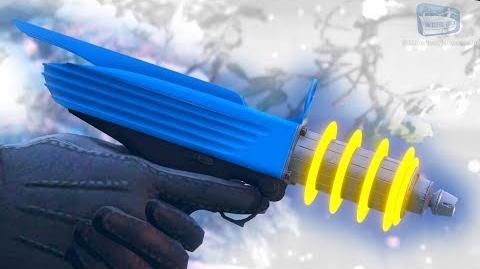