• ­Steal the helicopter from the military fuel dump, the gates will open for a military vehicle.

• ­They have sent two gunships to intercept you, use the gun emplacement to destroy them.

• ­The gunships have been destroyed, get to the chopper and get out of there.

• ­Go to the depot and pick up the bank van using the helicopter's winch.

• ­Take the bank van to the Aircraft Graveyard in the desert.

• ­Pick up the bank van. (If the player drops the Securicar by accident)

• ­The van has to be on its wheels! (If the Securicar gets dropped off to the red marker upside down)

• ­Land the helicopter in the indicated zone.

Breaking the Bank at Caligula's

"Then we need to steal a sky crane. Unfortunately, I'm not a pilot."
— Wu Zi Mu

"Shit. I'll fly it, then. We can respray it at the airstrip."
— Carl Johnson

Up, Up, and Away! is the second to the last mission in the Heist strand given to Carl Johnson by Wu Zi Mu in in Grand Theft Auto: San Andreas.

Carl recently seized four HPV-1000 Police motorcycles to be used as outriders to escort the armored van Carl plans to use to haul the off the cash. His last step would be to somehow obtain an armored van and respray it with the Caligula's Casino logo, but he makes up his mind that he won't raise suspicion to his team by doing a simple carjacking. Zero gives him the idea to hijack a 'sky crane,' called a Leviathan. Carl heads over to K.A.C.C. Military Aviation Fuel Depot, the fuel depot in Spinybed, northeast Las Venturas. CJ penetrates the compound while keeping soldiers armed with assault rifles at bay. Carl takes down a pair of Hunters using a gun emplacement, before lifting off with the Leviathan. He heads to the depot, and using the magnetic winch attached to the helicopter, lifts an armored van and airlifts it to the airstrip in Verdant Meadows.

The reward for completing the mission is increased Respect and the Leviathan will always spawn at the Aircraft Graveyard in Verdant Meadows unless the player has unlocked the Hunter, then it will only spawn when arriving from east. This also finishes planning for Breaking the Bank at Caligula's.

There are at least four different ways of getting into the depot.

Both the above solutions will result in Carl getting into a firefight and having to pass through a warehouse to get to the helicopter.

Most mission cutscenes are scripted in such a way that if CJ hasn't yet completed a particular mission that is not part of a mandatory strand, it doesn't affect the narrative. However in this mission's cutscene Zero makes a reference to fighting Berkley, which becomes meaningless if the player hasn't played Air Raid and the other missions of the Zero strand yet (in fact, the Zero missions are completely optional for completing the game, though still required for 100% completion status, so they can be played out anytime before and/or after the endgame). This can suggest that canonically Zero's missions are completed before this mission. 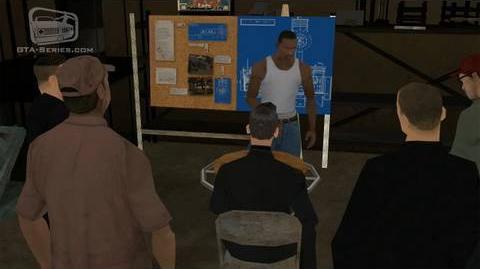 GTA San Andreas - Walkthrough - Mission 82 - Up, Up and Away! (HD)
Original Version 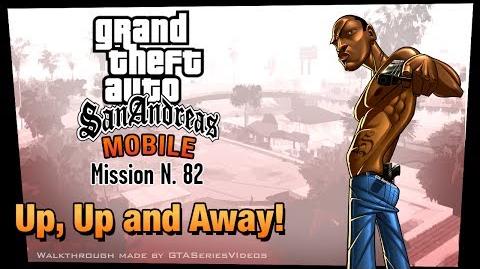 GTA San Andreas - iPad Walkthrough - Mission 82 - Up, Up and Away! (HD)
Mobile Version 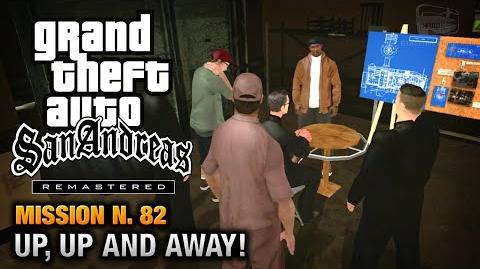 Retrieved from "https://gta.fandom.com/wiki/Up,_Up_and_Away!?oldid=1212072"
Community content is available under CC-BY-SA unless otherwise noted.