View source
watch 02:34
Fire Emblem Warriors: Three Hopes - The Loop
Do you like this video?
Play Sound
Not to be confused with the Unnamed Korean buyer.

None
“Kenny heard about the lick through this Korean dude... bottle service, VIP type at the club. He was running a printing press till the feds took his counterfeit plates... for their own usage. If we help him get them back, he gonna pay out big.”
— Sessanta

Nothing is known about his background. It is also unknown which Korea he is from and if he is affiliated to the Kkangpae. [1]

KDJ met the Korean at The Music Locker's VIP Lounge in 2021, while he was discussing the "superdollars" currency and how the feds took his counterfeit bank plates for their own usage. The Korean then asked KDJ if he knows someone who can retrieve his plates back from the Fort Zancudo military base. 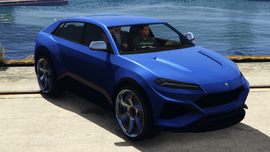 The client's Blue Toros as seen in the The Superdollar Deal. (Rear quarter view)