View source
watch 02:56
Raise a Floppa - The Loop
Do you like this video?
Play Sound
Not to be confused with the Unnamed Korean client.

Unknown
“Sweet rides, homies. We goin' get so much beaver in SK.”
— The buyer to the players.

The Korean buyer is a member of the Kkangpae, a South Korean criminal organization, who specialises in vehicle exporting.

During the mission Slow and Low, Lamar Davis enlists the help of two players to have two lowriders delivered from the Del Perro Pier to the Grand Banks Steel Foundry in Cypress Flats as a favour for Vernon, who sets up a deal with the Korean buyer to have the lowriders exported to South Korea, namely its capital Seoul.

Upon arriving at the deal, the Korean buyer will introduce himself to the players and leave positive comments on the lowriders and briefs the players on how he'll have the vehicles in South Korea in two weeks time. After this, the Ballas ambush the deal as a result of having their offers for the lowriders declined.

It is possible for him to be killed during the shootout; however, if he survives the altercation, he will simply flee the area. 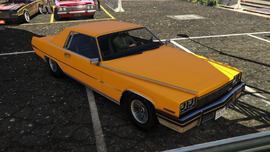