None
“Now this lady who payin' us is a shady-ass motherfucker. Like she wearin' government issued pantsuit kinda shady.”
— KDJ to the GTA Online Protagonist during The Union Depository Contract.

Very little is known about her background aside from the fact that she is a corrupt FIB agent. 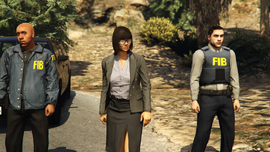 The FIB client and FIB agents at the end of the The Union Depository Contract.