Unknown
“Who? Loc? Oh you mean Jeffrey! Yeah, our Appliance Technician called in sick so Jeff- LOC, he got promoted.”
— The employee to Carl in Management Issues.

He appears during the mission Management Issues as an order taker at Burger Shot. When Carl asks him if OG Loc is around, the employee at first does not understand who CJ is talking about. Soon, when he realizes that he is actually asking about the employee Jeffrey, he tells Carl that since the appliance technician got sick, OG Loc got promoted and is currently cleaning the fryer. 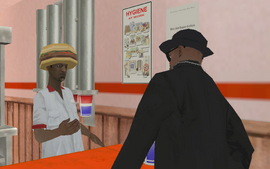 The employee talking to Carl. 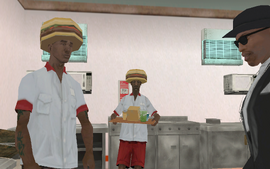 The employee bringing the order.