The Armenian client was formerly an employee at Fleeca, being involved at middle management. According to KDJ, he caught his wife cheating on him with his boss before he was promptly fired.

The Armenian subsequently met KDJ at The Music Locker in 2021, putting out a contract through him in order to rob multiple Fleeca franchises located throughout Los Santos and Blaine County as an act of vengeance for his wrongful dismissal. During Planning Work: Signal Jammers, he supplies the GTA Online Protagonist with signal jammers left in the trunk of an Emperor that delay police response times to any given Fleeca bank.

The player, tasked by KDJ and Sessanta, robs all 6 accessible Fleeca franchises storing marked bills before delivering them to the Armenian client with the goal of laundering the bills. 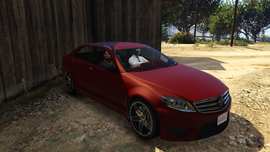 The client's Red Schafter V12 as seen in the The Bank Contract. (Rear quarter view) 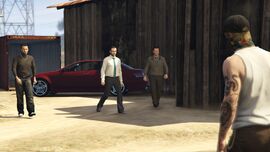 The client and his drycleaners.