Milton James (GTA IV & V)
Jeff Steitzer (GTA Online)
“The FIB? Do I look homosexual? Do you think I care about the size of your Johnson? Now... you can't always tell who the good guys are. I'm not a good guy. But I'm fighting with them, and guess what? So are you.”
— The U.L. Paper Contact to Niko Bellic in Wrong is Right.

The United Liberty Paper Contact, at some point prior to 2008, became a secret government agent and started working for the United Liberty Paper, later revealed to be a front for the International Affairs Agency (IAA). He was born at some point between 1943 and 1963 and mentions a past military career in the U.S. Army. He has a history of working with drug dealers on the West Coast of America and has historical ties to Russians going back to the late 1980s and early 1990s when they started emigrating to America on Israeli passports. By his own admission he was "the first in (to Russia) in '91 and the first out in '11". He also possibly has a history of working operations during the Yugoslav wars as he speaks Serbian (to Niko).

The Contact blackmails Niko to work with the U.L. Paper after Niko finds out that his girlfriend, Michelle, was an agent assigned to monitor him. The Contact then gives Niko several tasks that usually include killing people that are "supposedly" linked to a powerful terrorist group. He also has him cover up some of U.L. Paper's activities, such as by killing a man who knew of the Organization, killing another man who funded terrorist plots and stealing a helicopter from the terrorist group to kill yet another man who funded the group's activities.

During the course of the mission line for The Contact, he tells Niko that, in repayment for his cooperation, he will find the man that Niko came to America to find. He ends up keeping that promise towards the end of the game when he has Darko Brevic delivered to Francis International Airport for Niko to deal with him. After this, he informs Niko that he's on his own and wishes him the best. If Niko kills Darko, The Contact sends Niko an email stating that he hopes he got what he wanted in the end and informs Niko that he has let go of all the negativity and what happened with Darko, try new things and move on. If Niko spares Darko, The Contact sends Niko an email congratulating him on doing the right thing, telling him to move on with his life and for him to take care of himself, bidding him farewell. If Niko responds positively to either email, he'll thank The Contact for his help and wishes him luck on running the world and concludes by saying it doesn't seem to be going good.

The contact (credited as United Paper Man) makes his first appearance in Grand Theft Auto V at the end of the mission Monkey Business, where he, along with two soldiers, discovers FIB agent Steve Haines, who shot himself in the leg so that Michael De Santa and Dave Norton could get away with the chemical agent they had stolen.

He appears again later in the mission The Wrap Up. Here, he shows up to the stand off between De Santa, Norton, Haines, and Agent Sanchez, alongside several IAA agents. Then, corrupt FIB agents show up, compromising the situation even further, and then Merryweather Security shows up as well. After the opening cutscene is over, a three way shootout commences on the roof. During the fire fight, the contact will arm himself with an unmodified pistol, and can be shot, either by Michael, FIB agents or Merryweather operatives. Ultimately, the contact survives the incident.

“Whoever's running this show has got a lot to answer for. It might have looked like I was caught over there, but that was smoke. It was a play to make them think I'd go double. I've been working the Russians ever since they started coming in on Israeli passports... I was the first in in '91 and the first out in '11. Yeah, I know their moves. I know their counter moves. And all this smells off. Something's happening here, we don't know what it is, how deep it goes. I was this close to unlocking it. The Russian agents, the data thefts, the leaks... All this nonsense. Bogdan is on his way. To Talk. But then you come along, and now you've probably, for all I know, started World War III! Goddammit!”
— ULP to the Online Player, about why he was captured.

In 2017, he makes an appearance in Act 2 of the Doomsday Heist, in which he was kidnapped by the Russians and being held captive at a foundry in East Los Santos. The player and their crew members are required to extract him from the foundry and bring him to a secure location, where he will be looked after by Avon's security team.

Later in Act 3, the player and their crew have to help Agent ULP return to the IAA. The players need to escort him in his Havok from Procopio Beach to the IAA hideout, using Ramp Buggies and a Chernobog to fight off Cliffford Mercenaries in Valkyries and Dubsta 6x6s. Upon completion, Phoenicia Rackman expresses her relief on the job well done, and identifies ULP by the name "Bernard", telling him to stay safe after the event, to which Lester reacts with a question, "Bernard?".

Quite sardonic and not without his patriotism, the contact justifies his and the organization's actions by saying that foreign terrorist groups and governments that conflict with America are ready to commit even more heinous actions that could bring harm to the American population (which Niko finds to be true while working against said terrorist groups), but he also doesn't deny that a lot of his actions are not for procuring public safety but rather to satisfy the government's sometimes greedy requests. In the first cutscene of his first mission, it is revealed that he speaks Serbian, the language of Niko's home country, as he says, "Just like the old country.", to which Niko replies, "Just like it". In 2017, he has a habit of saying "Goddammit" repetitively.

The Contact's dead body in the mission "The Wrap Up" in Grand Theft Auto V (non-canon death). 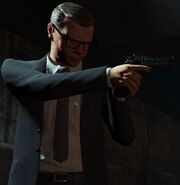