View source
This article is about the mission given by Bernie Crane in Grand Theft Auto IV. For the road in Algonquin, see Union Drive East and Union Drive West.

In-game time
“They don't even know what they're in for. No way. Nothing stands in the way of love. Love is strong enough to rip down mountains and throw trucks and all that stuff.”
— Bernie Crane, about the blackmailers

Union Drive is the second mission in Grand Theft Auto IV given to protagonist Niko Bellic by Bernie Crane from his apartment on Ivy Drive South in Middle Park West, Algonquin, Liberty City.

Niko arrives at Bernie's apartment to find him hysteric and on the phone with his love interest, Bryce Dawkins. When Bernie gets off the phone, he tells Niko that he and Bryce are being blackmailed by someone who knows about their "relationship" and asks Niko to help warn them off. Once the player obtains a vehicle, Bernie explains that the people that he and Niko are meeting are representatives of the blackmailers in Northwood. When the player reaches the rendezvous point, it is revealed that the group of blackmailers is working with Dimitri Rascalov and plan to take their story to Weazel News. The player must then chase the blackmailers down and eliminate them. 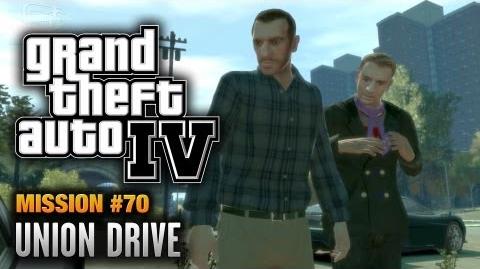