Even though not explicitly confirmed as such in-game, the Union Depository seems to act as the country's central bank, as implied by its name, description as a "super bank", and role as the holder of the national gold reserves. Thus, the bank plays roles similar to those of the actual U.S. Bullion Depository in Fort Knox, Kentucky, as well as the Federal Reserve in Washington, D.C. Its Los Santos branch occupies the 5th tallest building in the city. The bank's logo is an open red padlock. The building is in constant vigilance by guards in the interior and a special LSPD unit. A security guard is always guarding the bank's entrance on Power Street.

The Union Depository tower is not directly based on any building in Los Angeles, although the building's height, initial location and setbacks are most likely based on the Gas Company Tower and its hexagonal footprint is based on the Mellon Bank Center. The building's design is in fact very similar to the rear facade of the 333 Wacker Drive Building in Chicago. 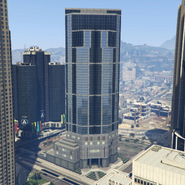 General view of the skyscraper.

Overhead view of the building.

The corridor to the elevator.

The corridor to the vault.

Entrance to the vault.