Niko inside the Triangle Club

Wasted
Busted
Trunchez Brothers get away

The Holland Play (Only if Photo Shoot has been completed)

In-game time
“I mean, I used to have everything. I used to run Uptown, Bohan, all that shit. Now I ain't shit.”
— Dwayne Forge
“Hey, let's get it back.”
— Niko Bellic
“No. I can't man. I ain't got the energy no more. I been stabbed in the back too many fucking times.”
— Dwayne Forge

Undress to Kill is the second and final mission in Grand Theft Auto IV given to protagonist Niko Bellic by Dwayne Forge from his apartment in North Holland, Algonquin, Liberty City.

Dwayne is still feeling suicidal over his situation. Niko asks Dwayne what's bothering him and Dwayne eventually mentions a gentlemen's club, a "classy place", that he used to own. Niko offers to retake it for him. The club Dwayne mentioned is The Triangle Club in Bohan.

Head over to Bronco Street in Bohan and enter the strip club. If the player enters the club with a weapon equipped, they will have to fight the security guards. If the player fires a gun or start fighting in the club itself, the managers will all run and many of the patrons will open fire on Niko.

Once inside, the player will need to locate the three Trunchez Brothers acting as managers for the club.

Listen in on a nearby conversation of two people near the top of the stairs. They say that the first manager, Jose Trunchez, is counting money in the office. The second manager, Javier Trunchez, can be found near the main stage overheard arguing with one of the strippers about her pay. The final manager, Jesus Trunchez, is through the back corridor, receiving a private dance from the newly-hired stripper.

Jose can be killed quietly in his office with fists, a knife, or a baseball bat. Attacking either of the other two managers will cause the patrons to start a gun battle, and the surviving manager to run.

If the manager escapes from the building, he'll climb into a Cavalcade FXT in the parking lot (if escaped by front door) or near the backdoor (if escaped by backdoor), take a shortcut down an alley leading south, and try to flee in his car. If this happens, Niko will have to chase him down in a vehicle of his own, or a Coquette, which also spawns nearby. If any manager gets too far from him, the mission is failed.

This mission can be difficult. There are a few different strategies to make it easier.

To avoid battle inside the club:

After killing Jose in his office, ignore Javier and head to the back. Quickly kill Jesus and his bodyguard. There is a back door leading outside at the end of the corridor. Take it, run around to the parking lot as quickly as possible, and try to kill Javier as he exits the club. Even if the player isn't quick enough, it avoids the gun battle inside the club.

To trap everyone in the club:

Before entering the club, park a car up against the back door. After killing Jose in his office, take out a sniper rifle and shoot Javier in the head. Jesus will be unable to escape through the back door because the car is blocking the door, and so he'll come back through the club where he can be easily shot.

To complete the mission with a single shot of Rocket Launcher:


Enter the club and wait for the message "Locate the managers by listening in on conversations". Then kill some of the guards and when you see the red circles move on the map just run out and go around the building. Then wait until all the managers enter the car, take out the rocket launcher and blow up the car.

Strategy for if the player has not yet collected a Rocket Launcher:


This strategy is a combination of strategies 2 and 3, with the exception of using a rocket launcher. Park a car against the back entrance of the club. Enter the club through the front entrance and kill Jose in his office with a knife, baseball bat, or with fists. Switch your weapon to a gun and fire a shot or kill a guard near the bar. This will cause the game to identify the other managers as red blips on the radar. Immediately run back out through the front entrance and wait for Javier and Jesus in the parking lot (they will try to escape out of the back entrance first) and gun them down when they get outside. Once you leave the club, the security guards will focus their attention on the shooters inside the club and ignore Niko, so the player shouldn't take much damage using this method.

To kill as fast as possible:


Enter the club and kill Jose with your fists in his office. Immediately un-equip any weapons Niko is carrying, and go to the far end of the club behind Javier, to the ATM machine. Quickly draw a weapon and kill Javier, then immediately bolt to your left and run to the lap dance room where Jesus is. If the player is fast enough, Jesus will be stuck in there and they can quickly finish him and his bodyguard off.

This is a combination of the second and fourth strategies. Before entering the club, park a car against the back door. Then enter the club and kill Jose with fists in his office. Immediately un-equip any weapons being carried, and go to the far end of the club behind Javier, to the ATM machine. Quickly draw a weapon and kill Javier, then as the player wait for Jesus to run to the front of the club, due to the player having blocked off the back exit beforehand, take out some guards. Then just gun down Jesus with a SMG as he runs past. This strategy is helpful if the player is not wearing any armour. The player will still die after the mission is completed though, so it is recommended that he have autosaving enabled.

This is probably the most tactical approach, and it's very unlikely that the player is going to die. Start out by entering the private room where Jose is counting the money and quickly kill him with the knife or baseball bat, then unequip any weapon before leaving the room. Go past Javier to overhear his conversation with one of the dancers to identify him; this is done merely to have a marker appear above his head and his blip on the mini-map, which will come in handy in a moment. Ignore Javier for now and instead go to the lap dance room. A shotgun is recommended for this part. Quickly shoot the bodyguard and Jesus (at this range, one-shot kills are guaranteed).

Now run back to the main room, taking cover at the door frame if possible, and quickly kill only the few hostiles right in front of the player through the frame and taking cover at the railing than overlooks the main room. Javier will still be here (easy to spot due to the aforementioned red marker/blip), taking cover behind a nearby table. If there are still any enemies on your side of the railing, deal with them by staying in cover and blind-firing a Micro-SMG, which is very effective at this range. Once they're dealt with, simply shoot Javier; the tables and chairs he hides behind provide very poor cover.

Unless the player has taken a lot of damage, which is rather unlikely, they can now escape the club by quickly making their way to the main entrance and either ignoring everyone shooting at the player or taking out whoever poses the greatest threat.

"When customers arrived at the Triangle Strip Club in Bohan they were hoping to see some flesh - but not this much. After a violent shootout, many bodies, chuncks of meat, and viscera were strewn around this gaudy exotic dance venue. Amongst the dead are the brothers who ran the club, Javier, Jesus and Jose Trunchez. The three were known associates of criminals including the recently released crack kingpin Dwayne Forge. Police say the shootout was not the result of a drug deal gone bad but rather a dissatisfied customer. The killer is said to be a male with a European accent. Other strip clubs such as the known mob hangout Honkers in Alderney have increased their security." 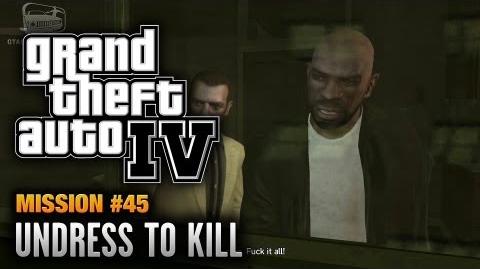 Killed by Niko so that Dwayne can get the Triangle Club back: