Uncalculated Risk is a Strangers and Freaks mission in Grand Theft Auto V, given to protagonist Franklin Clinton by Dom Beasley. Completing it contributes toward 100% Completion. The mission only becomes available after completing all 13 Parachute Jumps unlocked after the mission Risk Assessment; although all three characters can do the jumps, only Franklin can trigger this mission.

Along the shore of the Land Act Reservoir in the Tataviam Mountains, Franklin meets the same dog he discovered in Risk Assessment. Following the dog's guidance, Franklin heads to the Land Act Dam. There, he sees Dom preparing to jump from the dam without a parachute. After psyching himself up and taunting Franklin about his doubts, Dom jumps and, predictably, dies on impact. At this point, the player can complete the mission simply by walking away. The player can also complete the mission by jumping from the dam (there is a stairway to the left of where Dom jumped) and parachuting down to the river below.

"Dom Beasley, a hedge fund whiz kid and extreme sports fanatic has been found dead at the bottom of the Land Act Dam; in what police are calling an idiotic attempt to defy gravity, that could only ever had ended in one way."

"A hedge fund whiz kid was found dead earlier near the Land Act Dam, in an extreme sports stunt gone horribly wrong. Dom Beasley, according to his Lifeinvader page, was a base-jumping fanatic who had become addicted to chasing ever more dangerous highs, quite possibly to over-compensate for his soulless existence in the banking industry and his lonely contribution to the human race. No parachute was found on Beasley's body, suggesting that he either jumped, was pushed, or was simply an idiot." 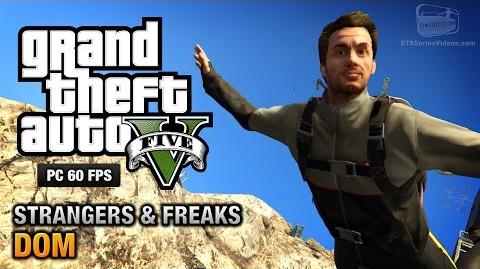