No
“What red-blooded American hasn't gazed at an eagle as it soars through an empty sky, utterly serene, perfectly at one with its environment, refined by millions of years of evolution into the epitome of aerial dexterity and lethal precision, and wondered: what could be more majestic, more dignified, more trascendent? Well, now you know.

Please note: This aircraft is excluded from Pegasus Lifestyle Management and must be stored in a personal hangar.

The Nagasaki Ultralight is a glider featured in Grand Theft Auto Online as part of the Smuggler's Run update.

The Ultralight is an ultralight trike, which is a type of powered hang glider. It is primarily based on the Air Creation Racer, with the cockpit and wheel fairings removed and added a more responsive wing.

The vehicle features a tricycle undercarriage and a large glider wing on top that is controlled by the lower handlebar, having various articulation joints for the basic aircraft maneuvering. The Ultralight features a small console with the "Flyer" dials on the front, a single seat in the middle and the engine behind the main support of the wing. Several parts that provide the basic functioning of the engine, such as the radiator, the alternator and the fuel tank, can be seen around the engine and the rear section of the vehicle's frames. As with various vehicles featured after the Bikers update, the engine has fully-animated pulleys and timing belt.

Its primary color is applied on the main body, front suspension, front portion and rear frames of the wing, upper side of the intake manifold and the rotor' spinner, while its secondary color is applied on the frames that hold the front wheel, seat, handlebar, rear section of the wing, fuel tank, rear suspension springs, air filter, engine cover and a set of tubes connected to the alternator. Although not accessible, there is a tertiary/trim color that is applied to the "7.62mm Gimbal Turret" option, which is always set to black. It uses plain industrial wheels similar to the ones used in aircraft like the Titan and the Hydra.

As stated before, the vehicle can be equipped with a 7.62mm Gimbal Turret, which is about the size of the mounted cameras seen on the Maverick, the Police Maverick, the Frogger, the Buzzard and its Attack variant. 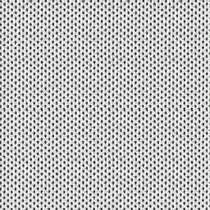 The Ultralight performs differently from other general aircraft, as it has a lower ceiling (maximum altitude) than other aircraft, at 4,800 feet. It also has limited maneuverability; having no rudder, it has very limited yawing capabilities and requires banked turns, and it cannot perform knife flights nor fly upside down for too long, as the aircraft will "correct" by itself, not to mention it may lose airspeed quickly when attempting to go vertically. Landing the Ultralight is tricky because its vast wing and weight make it very easy to lift when making contact on the ground. Touching down at or slightly below level to the ground is recommended (although it is better using the altitude indicator in the first-person cockpit). After The Cayo Perico Heist update, the glider wing is non-solid and can clip through walls and objects.

Still, its nippy handling on the ground, short take-off and landing distance make it versatile to use in almost any terrain and is great for cruising around the map. As a glider, the Ultralight can glide indefinitely with the engine off and the pilot's proper maneuvering. Careful to not run directly to the aircraft, as it can be easily pushed and the character may get knocked out. In addition, sharp turns may flip the aircraft easily when taxiing around.

The Ultralight is powered by a small Inline-4 engine, which produces a rather noisy sound, likely due to it being exposed.

The Ultralight is generally decent at evading targets, but is also fragile against collisions and gunfire, as it can easily emit smoke after a few impacts or firearm rounds. The pilot is also vulnerable and can be killed in the process.

The most redeeming feature of the Ultralight is that if the Muffled Carbon Propeller is added, the aircraft can allow the player to go off the radar while gliding, cruising or under gentle acceleration, making it useful to avoid detection by hostile players.

Machine Gun: The Ultralight can be upgraded with a 7.62mm Gimbal Turret mounted at the end of the front frame. This weapon offers great firepower for its kind against target and vehicles, being comparable to the guns of the Tula and the Stromberg, as well as having near-complete coverage at about 300 degrees of rotation and 40 degrees of elevation up and down. The player can optionally choose the weapon camera, although they will have difficulty orienting for the aircraft itself if the gun is selected. Its sound is identical to that of the APC's side machine guns.

* Reduces detection on the radar during initial acceleration and when freely gliding at low speeds.

Pre-release screenshot, featuring the Ultralight in front of the Tula. 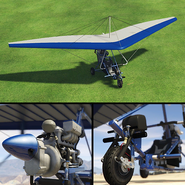 The Ultralight on Elitás Travel.

The Ultralight on the updated Rockstar Games Social Club.

The Ultralight in a cinematic preview on Rockstar Games Social Club.