Standard White - 100%
“Originally designed as a road-legal confidence booster for the wealthy but poorly endowed, the Tyrus found its true calling elsewhere. It didn't just beat its race-tuned rivals - it serially teabagged them across every endurance grand prix in competitive motorsport. Which is particularly good for you, because you can pretend this isn't all about your tiny, tiny package.”
— Legendary Motorsport description.

The Progen Tyrus is a two-door endurance racing car featured in Grand Theft Auto Online as part of the Cunning Stunts update.

The car takes clear influence from the McLaren F1 GTR Longtail, the Saleen S7R and the Mosler MT900R, seen heavily in the general shape and front and back fascia. The frontal fascia takes minor influence from the Quaife R4 GT1, whereas the side/frontal vents, headlights and front overhang take inspiration from the aforementioned McLaren.

The Tyrus features a distinctively long body and a very aerodynamic design, where the front end has a plastic extender/splitter at the bottom. A set of mesh intakes can be seen on the vertical section of the car, the central one having a curvature on the upper side and a racing hook centered on it, followed by two split curved intakes on the edges and two canards on the front quarters of the vehicle. On the upper area, the car features a set of dual circular lamps with small turn signals, which are located in black housings and behind glass casings, together with bolted-on plastic trims around it. The bonnet is relatively aerodynamic, sporting a central intake, two concave sections, bolt details and safety pins.

On the sides, the front fenders feature bolted-on extensions and flat rear fenders with bolt details on the upper side, along with plastic skirts slightly extending out of the body. Two inset formations can be seen through the doors, with the upper one starting from the front vents and leading to the rear ones intended to direct airflow to the engine bay, and the lower one leading to a lower vent intended to direct airflow to the rear brakes. The cabin area makes use of plastic trim with a Pißwasser banner on the top side of the windscreen and rear-quarter panels with circular vents, as well as the corresponding butterfly doors with bolted-on side windows and sections of the roof being carried with the door, although the hinge itself appears to be absent. The roof area features a long front scoop with an aerial mounted over it, while the area behind the cabin has an openable engine compartment with horizontal slatted vents on the sides and small vertical vents on the centre. Further towards the rear end, there is a smaller scoop with a vented panel intended to direct airflow to the gearbox/diff area, as well as a large spoiler mounted over the vented panel and a lip/ducktail spoiler on the rear end.

The rear end of the car has black panels holding the circular tail lamps, a central vent with "PROGEN" lettering on the lower passenger side and small upper strips for the third brake light and the reverse lights. The lower area is occupied by two rear vents with a single horizontal separation and a central meshed vent, with open sections for the twin-exit, twin exhaust tubes and the license plate in between the exhausts. The entire underside of the vehicle is carbon-plated, with an open section for the gearbox/diff and a diffuser on the rear end, with large horizontal panels mounted between the vertical blades.

The interior of the car makes use of steel foot rests, a carbon-fibre floor and carbon-fibre sport seats with race seatbelts, along with a coloured roll cage. The Tyrus includes various switches and buttons on the center console and passenger side and features a knob reading F/R, likely indicating a rear/four wheel drive locking diff. An RPM indicator can be seen in the gauge cluster below the digital dial, and a large extended gear-shifter is centralized on the console between the seats. Also, a radio is seen located under the dashboard, on the passenger side.

The vehicle only has a primary colour applied on the bodywork, roll cage, and interior stitching. Although not accessible, a trim colour is applied on the cage paddings and a dial colour for the digital display, which are set to black in purchased examples. Similar to vehicles like the ETR1 and RE-7B, the Tyrus features Atomic racing slicks for the stock wheels, with the rims having six spokes and an hexagonal centre. The rims can also support a dedicated wheel colour, although it is only present in examples generated in the Content Creator.

The car performs extremely well. The car has extreme grip, but can still understeer around corners occasionally. It has a high top speed thanks to its extreme power.

Under the engine cover is a V8 engine reused from cars like the Cheetah and the Reaper, with what appears to be two cold-air intake systems coming from the roof scoop (ram-air intake) of the car in a similar manner to cars like the Rapid GT, powering the rear wheels through a 6-speed gearbox. The engine sound is similar to the X80 Proto, being a very high revving engine, and the car tends to backfire when decelerating or revving quickly. When powered down, the engine shares the same sound effect used on the Shotaro and X80 Proto. 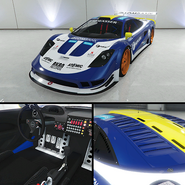 The Fukaru Tyrus on Legendary Motorsport. 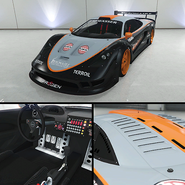 The Debonaire Tyrus on Legendary Motorsport.

The Tyrus on the Rockstar Games Social Club.

The Tyrus on the updated Rockstar Games Social Club.