Standard White - 100%
“The Tyrant is a testament to human ingenuity. We're not sure who's more impressive: the team of engineers who've taken us as close as human beings can get to installing a gear stick and a steering wheel in the front of a hurricane, or the team of lawyers who got it classified as road legal. Take your pick.”
— Legendary Motorsport description.

The Överflöd Tyrant is a hypercar featured in Grand Theft Auto Online as part of the Southern San Andreas Super Sport Series update, released on May 8th, 2018, during the Business Week event.[1]

The Tyrant is primarily based on the Apollo Arrow, with elements from the Apollo Intensa Emozione. The front bumper is very similar to the Taipan's and resembles that of a 2017 Ford GT.

The Tyrant has an enormous body structure, being the biggest road-legal super car in the game, surpassing even already large-profile vehicles such as the X80 Proto and the Taipan. The front is largely dominated by a black splitter with an upper intake surrounding and vertical fins on the edges, along with angled body intakes beside the central intake. The upper area features dual high-beam headlamps with thin strips above them, while the bonnet features a curved formation in front of the windscreen and the manufacturer emblem on the frontal section. The front compartment below the bonnet is finished in black, surrounded by carbon-fibre panels. Similar to the X80 Proto, two adjustable shock absorbers and springs for the frontal suspension can be seen through the front windscreen.

On the sides, concave upswept formations are seen passing through the doors, starting from the front wheel arches and leading to the meshed vents on the rear fenders, along with carbon-fibre panels at the bottom, behind the front wheels. What looks like Y-shaped formations can be seen on the lower area and over the rear vents, having a black concave formation below the doors, black skirts and smaller open vents in front of the rear wheels. The greenhouse area is rounded, featuring a curved windscreen with a single wiper in the centre and small black panels beside the door windows, as well as narrow rear-view mirrors and a permanent black finish on a part of the roof and the A-pillas. The engine area is fully enclosed, featuring a roof scoop, narrow rear body panels and carbon-fibre sections, holding two carbon-fibre fins for the spoiler.

The rear of the car is distinctively aerodynamic, featuring carbon-fibre separations, a black diffuser with mounted fins on either side, and a number plate in the centre. Two red tail lamps are seen on each side, as well as a single hexagon-shaped exhaust in the middle and a reverse LED light below it. The underside area has a carbon-fibre panel in the centre, leaving the rear axle section exposed.

The interior shares the same textures and dials as the FMJ, albeit using the corresponding manufacturer emblem on the horn cap and featuring paddle shifts behind the steering wheel, finished in carbon fibre. Most of the dashboard panel below the windscreen is finished in carbon fibre, with two open sections for the front suspension.

The primary colour of the car is applied to the body, while the secondary colour is applied to the suspension springs and the interior stitching. It uses a set of rims similar to the "Chromatic Z" high-end rims available in mod shops, with at least two colour sets with either white or black rims.

The Tyrant's straight line performance is similar to that of the Entity XXR and Taipan, cars featured in the same Southern San Andreas Super Sport Series DLC. However, the Tyrant has great handling and is very stable, unlike the aforemetioned cars. Owing to its size, the Tyrant cannot squeeze through narrow areas easily, although its mass often means slightly better pushing capabilities than most supercars.

The Tyrant has all four advanced flags enabled[2]:

The engine sound seems to be similar to the one found on the Cheetah.

Official screenshot of the Tyrant. 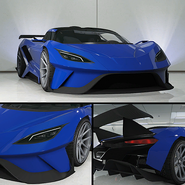 The Tyrant on Legendary Motorsport.

The Tyrant on the updated Rockstar Games Social Club.

The Tyrant in a Cinematic preview on Rockstar Games Social Club.

The Tyrant incorrectly placed in the cinematic preview of the Progen Tyrus on Social Club.

Överflöd poster with the Tyrant. 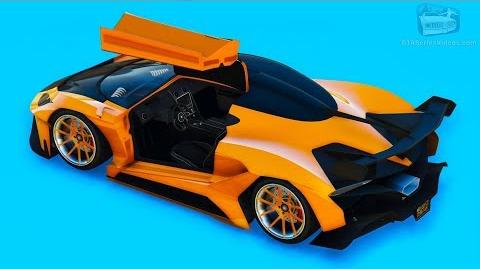