None (GTA IV)
John Palladino (GTA V & GTA Online)
“Tale Of Us! I'm about to get enough tail for the both of us.”
— Tyler to his assistant in GTA Online

He is a backup dancer and Cloe Parker's deadbeat fiance. He has demanded a $3-million dowry in response to the 900-page pre-nup that he was asked to sign earlier. Dixon has a history of drug addiction and petty crime, his record includes: possession of crack cocaine in 1998 and assault in 2004. He is said to have smoked PCP since he was five, and lost his virginity to his mother at the age of nine.

By 2013, Dixon has gone into acting and is set to star in a reality show that he's interviewed about on Chattersphere. Between 2008-2013, he was married to Cloe, but they ended up divorced. He appears in the Strangers and Freaks mission Vinewood Souvenirs - Tyler, where Nigel and Mrs. Thornhill ask Trevor Philips to steal Dixon's outfit for them. Trevor heads to Dixon's mansion to steal the outfit; when Trevor arrives, Tyler is romancing a recent acquaintance named Cathi. The player has the option to either "kill" Dixon, run away or steal the clothes without being spotted.

He will post a bleet on the Bleeter website after the mission if he is not killed, commenting about the robbery.

Tyler returns in GTA Online as part of the GTA Online: After Hours update where he is one of the celebrities the GTA Online Protagonist can be called upon to deliver to their club to maintain their popularity. He will then be found inside the nightclub for a period of time, in the VIP lounge area. If the job involves picking him up with his assistant, it will be revealed in dialogue that his assistant is Australian. They also discuss Tyler's hopes of getting acting work following the success of his reality TV show, particularly a romcom where he plays a gay man in a same-sex marriage who has a pet monkey. He has also released a line of t-shirts and written a memoir, over which his mother threatened to sue him for defamation (however, she told him she loves him and asked him for $30,000).

- History of drug addiction and petty crime.
- Violent tendencies, smoked PCP for 20 years.
- Believed to have lost his virginity to his mother at the age of 9.

Tyler appears to be based on Kevin "K-Fed" Federline, a backup dancer who is well known for his brief marriage to Britney Spears. He may also be based to a lesser extent on Cris Judd, a backup dancer and ex-husband of Jennifer Lopez. In his GTA V appearance, Dixon laments having temporarily gotten fat after his divorce, which had also happened to Federline. 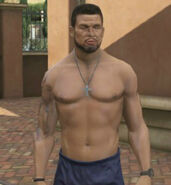 Tyler's appearance in the original version of GTA V. 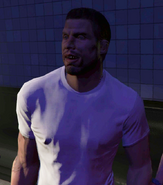 In the nightclub with his assistant.