Standard White - 100%
“Bored during rush hour? Need to make an impression when a dictator is in town? Sick of having to choose between a comfort and status of a limousine and the sheer utility of an Armored Personnel Carrier? German engineering once again provides the kind of efficient, goal-oriented solution the modern businessman needs by sticking a minigun on top of a stretch limo. It's obvious once you see it.”

The Benefactor Turreted Limo is an armed and armored limousine featured exclusively in Grand Theft Auto Online, added as part of the Executives and Other Criminals update.

The Turreted Limo is an armed variant of the Stretch E from The Ballad of Gay Tony, which, at the same time, is a limo version of the second generation Schafter. The body-style is based on a 2010 Mercedes-Benz E-Class Limousine W121 Limousine. The front resembles the W216 Mercedes CL-Class.

The Turreted Limo has a 3-box design with four pillars. Like the other armoured vehicles in the game, the vehicle adds armour padding on the sides and window armouring on the pillars. The sunroof from its standard equivalent was replaced by a turret similar to the ones from the Insurgent Pick-Up and Armored Boxville, featuring a mounted Minigun similar to the ones seen on the side of the Valkyrie and the Valkyrie MOD.0 (being a GAU-17/A minigun), except that the iron sight is absent.

The vehicle is only available in a black colour. Its wheels share the same rim design as the "Diamond Cut" sport rims available in Los Santos Customs, wrapped in low-profile tyres.

In terms of driving, the vehicle is extremely nimble. It shares many of its characteristics with the Schafter, rather than the V12 or LWB counterparts. In this respect, the car has average acceleration, comparable to the said vehicle, with a slightly lower top speed. The car is relatively light when driven, deceiving its armored appearance, which allows good acceleration and even better traction; little wheelspin is seen when setting of the vehicle. Not only is the power to weight ratio impressive, but it also has a great cornering radius, which is much better than the slightly shorter Stretch, even despite its wheelbase length and armor, but rear-ending the limo causes it to lose control due to the lack of weight, as well as the extended wheelbase.

Similar to the Schafter and its derivatives, the Turreted Limo has an engine cover similar to that of a typical covered V8 engine, although much simplier in detailing (it does not have protuding bolts for the cam covers). Said engine is coupled to a 4-speed gearbox in a front engine, rear wheel drive configuration. Its sound is also the same as cars such as the Schafter or the Tailgater.

Like other armored vehicles, the Turreted Limo features a reinforced armor that withstand a single explosive and bulletproof windows that provide decent protection until they shatter. The car is, however, significantly weaker than the other armored vehicles in the game. While the armored padding on the side doors does protect it from explosions, the car's light weight makes it prone to flipping or being sent flying into the air, which can often result in getting stuck. Not only is durability insufficient. Frontal impacts cause little damage to its lighting system; however, the vehicle's front end is still rather deformable, unlike the other armored Schafters (to which the limo is based on). All in all, the car is extremely well performing due to the shared platforms, however its armor can be said to deceive its actual efficiency, assuming that the Turreted Limo is not used for offensive purposes, unlike the well-armored Insurgent Pick Up.

The mounted Minigun on the back of the vehicle works similarly to the port and starboard guns from the Valkyrie, being relatively good at taking out targets and vehicles due to the fire rate. However, damage is relatively lower than the guns from the Insurgent and Technical, taking a bit longer to take out heavily armored vehicles. Both the gun and the turret hatch may offer some degree of protection against ground-level enemies, but they are still vulnerable to getting shot from the sides or elevated areas.

The rear passengers on the Turreted Limo can toggle between ducking into the vehicle or getting on the gunner seat by pressing right on the D-Pad. This tactic can be extremely useful in case the gunner is very weak and needs to regenerate their health back by ducking into the car. Once they regains their health, they can press right on the D-Pad to get back up on the gunner seat. Another tactic can be done if there are multiple players on the rear seats, they can take turns being gunners. The ability to use the turret can be done either from the passenger seats or while standing on the roof in case that both rear seats are occupied and another player wants to use the turret.

The Turreted Limo in a pre-release trailer.

Official screenshot of the Turreted Limo. 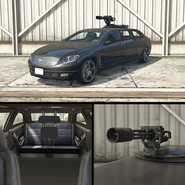 The Turreted Limo on the updated Rockstar Games Social Club.

The Turreted Limo in the cinematic preview on Rockstar Games Social Club. Note the different wheels.

View from the backseat.