20
For other uses, see Turismo (disambiguation)
“Grotti might have alienated their Old Money consumers by releasing a hybrid sports car, but 'fuel efficient' is relative when you're talking about 799hp. 0-60 in under 3 seconds and a top speed of 210 mph.”
— Legendary Motorsport description.

The design of the Turismo R is heavily inspired by LaFerrari, featuring its front bumper and greenhouse area, as well as being a hybrid electric hypercar. The front lip of the car seems to be inspired by the Trion Nemesis, while the headlights seem to be borrowed from the GTA Spano. The rear area is somewhat based on the LaFerrari (with a similar glass engine cover formation), although the tail lights are similar to those on the Faralli & Mazzanti Evantra. The shape of the rear seems to bear some resemblance to the McLaren P1, while the diffuser looks similar to the one from the Corvette C7.

The Turismo R is made up of many sharp curves and edges, giving it an aggressive appearance. The front end of the car is rather curved and features a carbon-fibre insert at the bottom centre, as well as a CFRP separation on the middle section that separates the meshed intakes. The upper area is rather bulky on the outer sides and has two black vertical housings, each one containing dual circular lamps. The bonnet area assumes a prominent wedge shape and has two V-shaped intakes around the middle section, with a small distance between each other. The Grotti emblem can be seen on the edge of the bonnet area.

On the sides, the car makes use of large concave sections running through the doors and going towards the rear intakes, featuring carbon-fibre skirts at the bottom and black details on the upper borders, along with silver "Grotti" lettering near the front wheels. There are also large curved panels covering the rear intakes, bearing "Turismo R" badges on them. The pillars and the roof of the greenhouse area are finished in carbon fibre, with the former holding rear-view mirror wings around the middle, and the latter having an impressed area on the centre.

The rear of the car consist of a slanted section behind the cabin that is mounted over a concave shape, where it features a triangle-shaped window with four small vents on either side, where the engine bay is located. There are two elevated sections between the slanted back and the rear bulky fenders, housing large intakes intended to direct air flow to the engine bay and rear exit vents. The rear end of the car houses two additional curved vents, a central section with the Grotti logo and dual circular tail lamps on the upper edges, along with a "Turismo R" badge on the passenger side. This whole section act as a rear clam for the engine bay, which hinges from the rear and opens to reveal the engine, the carbon-fibre separation of the cabin and black frames around. The lower area of the rear consist of a carbon-fibre section with two L-shaped light strips on the outer edges, the twin rear diffusers with three blades each and the central section with the license plate and the twin circular exhaust tubes. The underside of the car is mostly carbon plated, leaving the gearbox/diff exposed.

The interior of the car is shared with the Banshee, using the same dial set, layout and features. The Grotti emblem can be seen in the centre of the steering wheel.

The primary colour of the car is applied on the bodywork, while the secondary colour is applied on the portions around the cabin, the mirror wings, the side panels of the rear intakes and the interior stitching. The car uses a set of wheels similar to the "Sinthetic Z" sports rims seen in Los Santos Customs, but the circular detail on the centre is slightly larger. It also has low-profile tyres.

The Turismo R falls just short of being one of the fastest Super Cars in the game. Acceleration is excellent and there is a nice amount of wheel spin. Top speed is also very good, being as fast as the Zentorno. Because the car contains an electric motor, there is no loss of power during gear shifts. Therefore, the engine has a reputation for being very smooth and immediate. The engine is one of the most technologically advanced engines in the game. However, the Turismo R can be damaged very quickly often resulting in the hood coming off after a few collisions, especially at a high rate of speed. Unlike most quickly damaged cars, the wheels do not lock very often.

Just like the Cheetah, if the suspension is lowered to the maximum through Los Santos Customs, the Turismo R is able to drive right under high-suspension vehicles, such as the Sandking XL, at high speed and sometimes some low-suspension vehicles if driving head-on against them. The only downside to this, however, is that it has the tendency to hit curbs much more easily, damaging the car and even flipping it over. The same is true of the Zentorno, even with default suspension.

The engine model appears to be a single-overhead camshaft V8, evidently by the exhaust manifolds seen when the rear hood is removed, while the in-game website claimed the engine is a V12. The car features intercoolers located directly after the side-intakes, suggesting the car is turbocharged. The exact same engine model is found in the Cheetah. It shares its engine sound with the Feltzer and Carbonizzare.

The Turismo R on the Rockstar Games Social Club. 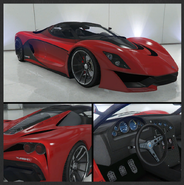 The Turismo R on Legendary Motorsport in the enhanced version of GTA V.

An NPC modified Turismo R that spawned in Rockford Hills.

The Turismo R on the updated Rockstar Games Social Club.

The Turismo R in the Cinematic preview on Rockstar Games Social Club.