Standard White - 100%
“The old-school sports classic is the kind of first impression Los Santos loves: Sleek, powerful, sexy, wildly ostentatious. Climb the sidewalk with confidence. Everywhere is your right of way.”
— Career Builder description.
“This is one for the purists. No hi-tech driving aids. No smart safety features. When you're three nanoseconds away from getting a mouthful of the truck in front, no onboard supercomputer is going to save you. But just like learning a language or killing a stranger with your bare hands, this kind of hard work is its own reward.”
— Legendary Motorsport description.

The Turismo Classic is a retro design based on popular 1980s Ferrari models, particularly the Ferrari F40 in the overall body design, frontal fascia, side profile, engine and rims. It also takes inspiration from the Ferrari Testarossa in the rear fascia and the large wing mirrors, as well as taking some influences from the Ferrari 348. The exhausts are inspired by the Ferrari F50.

The Turismo Classic is distinguished by its simplistic design with sporty elements around it, where the front bumper feature split grilles and a lower grille vent intended to allow air to flow underneath the car, followed by small ducts on the wheels arches intended for brake cooling. Above the bumper, there is a sloping bonnet that holds the integrated pop-up headlamps, the blue Grotti badge on the centre, the side vented sections and the single slit intake near the cowl for radiator and air cooling. The headlamps themselves consist of four rectangular units, the inner ones being large main lamps and the outer ones being smaller turn signals, with black details around them. Unlike most pop-up headlamps from cars like the Tropos Rallye and the Infernus Classic, the lamps are not fully hidden within the car's body. The bonnet hinges from the front and opens forward to reveal a spacious luggage compartment and portions covering the wheels.

The side profile is aerodynamic, with a wheelbase that is relatively short when compared to the Infernus Classic. The car's most prominent feature is the inset door panels which allow for air to flow continuously to the rear intakes, leading to the engine bay (upper) and brakes (lower), accompanied by a slight curve that blends into the rear arches. It is on this curve that the car's door handles are mounted on. On the greenhouse area, the A-pillar sweeps over the cabin, before dipping to form the C-pillar, and flowing into the rear fenders, while the curved glass of the rear quarter windows directs air into the additional engine intakes situated behind them. The large rear window allows for an unspoiled view of the hulking, mid-mounted V12 engine. Large wing mirrors supported by two thin, curved frames can be seen mounted on the A-pillars.

On the rear fascia, a black section can be seen partially covered by a decorative grill that extend their entire width. This section holds large rectangular tail lamps on the outer side and square-shaped smaller lamps on the inner side, along with the Grotti wordmark on the upper left corner and a unique Turismo badging on the centre. Directly below the black section, six small exit vents can be seen on either side of the car, with a trapezium-shaped section between the inner vents. The rear bumper holds a license plate on the centre and features large outer edges, with dedicated slots for the dual, twin-exit exhausts with a black trim around. The engine compartment opens forward too to reveal the engine, the black sections and the exhaust tubes leading to the rear end of the car, featuring two support arms on either side.

The primary colour of the car is applied on the bodywork, while the secondary colour is applied on the mirror wings. A trim colour is also available for the interior, painting the dashboard and the doorcards. It uses a set of wheels identical to the "Five Star" rims available in Los Santos Customs, albeit using more bolt details on the surrounding.

The Turismo Classic has a perfect mix between sleek, aerodynamic design and lightweight bodywork, allowing for good acceleration and a high top speed. The vehicle's powerful V12 engine can be seen mounted in a rear-mid position, powering the rear wheels. The car's handling is stellar in its class, providing good downforce and stable cornering. The brakes are somewhat poor compared to more modern vehicles, but compared to its classmates in Sports Classics, they are more than acceptable. However, it has a somewhat poor turning radius, and can be prone to spinning out.

Despite the car's age, it features a 6-speed gearbox like its rival, the Infernus Classic, allowing for high potential. It is the fastest Sports Classics vehicle around a traditional circuit as well.

The engine sound is high-revving, appearing to be an edited version of the Cheetah engine. 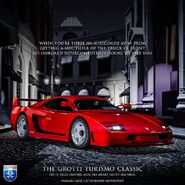 A promotional preview of the Turismo Classic. 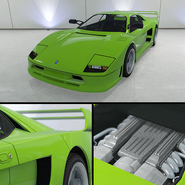 The Turismo Classic on Legendary Motorsport.

The Turismo Classic on the updated Rockstar Games Social Club.

The Turismo Classic in the cinematic preview on Rockstar Games Social Club.

The topless Turismo Classic in the gameplay of Race and Chase: Street Legal. 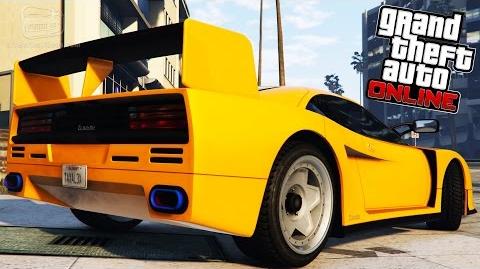