In-game time
“Word has it that the Lost MC are collecting weapons from their supplier at the Ron Alternates Wind Farm. What the real purpose of them turbines is the subject of another missive, it's pertinent right now the Lost don't get them arms and TP Inc. does. When you get'em, drop'em at Trevor's trailer and I'll have some funds for you. R. Jakowski.”

Turbine Carbine is a mission in Grand Theft Auto Online given to the player by Ron Jakowski. It is available for up to 4 players.

The team goes to the RON Alternates Wind Farm where they find a Lost MC weapon deal happening. The team must kill the gang members and steal the Gang Burrito containing the weapons. Few Lost MC members will chase the player driving the van on the way back to Sandy Shores. The team needs to take the van back to Trevor's trailer where they will get their pay. 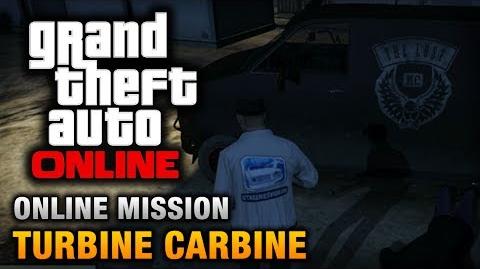