20
“Can you believe something this beautiful was once built and sold for nothing more than Joe Lunchbucket's paycheck? Sure, the Seventies were a crazy time, but what the hell was that about? Luckily for you, civilization is back on track, and these days Joe's food stamps don't count for much when you and the rest of the one percent are dropping last night's poker chips for a slice of his pawpaw's blue-collar chic.”
— Southern San Andreas Super Autos description.

The Declasse Tulip is a muscle car featured in Grand Theft Auto Online as part of the continuation of the Arena War update, released on January 15, 2019, during the Tulip Week event.

The Tulip takes design cues from the 1972 Chevelle Malibu. Just like another Declasse vehicle, Sabre Turbo, the Tulip's rear seems to be inspired by 1970 and 1972 Oldsmobile 442. The rear lights and front bumpers are also reminiscent of a 1967 4-Door Chevrolet Impala, especially when the bumper's secondary colour is "Chrome".

The Tulip assumes a body shape similar to the Sabre Turbo and the Stallion, where the front end features a wide bumper with rectangular amber lights on either side, along with a license plate on the center. The upper area of the car is occupied by a grilled section bearing the manufacturer logo on the center and two circular headlights on the edges, housed within plastic, square-shaped sections. The hood is relatively simple and has a slightly pronounced center. On the sides, the car makes use of painted trims on the wheel arches, while two side-exit exhaust pipes can be seen near the rear wheels. The cabin area features painted trims passing above the windows and on the inner pillars, along with square-shaped mirrors. The rear of the car has a slanted trunk bearing silver "DECLASSE" lettering on the passenger side, while the bumper has the license plate on the center and a set of three vertical tail lights on the edges, together with what looks like bumper overriders beside the plate. On the underside, the car has a visible fuel tank. It uses the "Dominator" interior.

The car's bodywork, part of the engine and the rims are painted with the primary color, while the bumpers, grille and the trims found around the car are painted with the secondary color. It uses a set of wheels that are identical to the "Spooner" muscle wheels available in Los Santos Customs.

The Tulip's speed and handling is remarkable, though tedious when driving it the first time and it has bouts of high wheelspin upon taking off. Its suspension travel when airborne is problematic and can be relatively jumpy around bumps and has bouts of oversteer if turning a corner too hard without properly managing it. Not only that, its steering is quite jerky on even the slightest turns. Even with fully upgraded suspension, it still has issue with oversteer. Still, the Tulip is quite the competitor for races and can easily catch up to equally-faster vehicles at the hands of an expert driver.

When modified with a supercharger upgrade, the bypass valves will open and close when revving the engine.[1] The Tulip's wheels will also camber negatively with suspension modifications.[2]

The car holds a V8 engine with a mounted cylinder air filter, positioned in a front-engine, rear wheel drive configuration through a 4-speed gearbox. Its engine sound appears to be a combination of the sounds found on the Dominator and the Imperator, with the former faintly heard on higher revolutions.

Alternative badge, used in an advert. 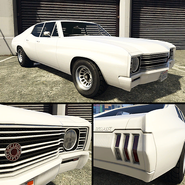 The Tulip on the updated Rockstar Games Social Club.

The Tulip in the cinematic preview on Rockstar Games Social Club. 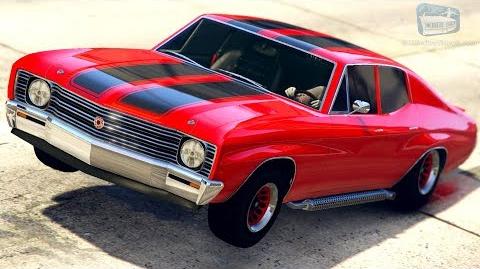