Standard White - 100%
“Remember the kid who always had a multi-tool with him? Remember how popular he was, and how often he got laid? Well, if he had survived high school, there's only one set of keys he would have in his fanny pack: the Tula is a quad-prop monster with VTOL and water-landing capabilities, space for turrets and a bomb bay, and the capacity for JATO upgrades. Be Prepared.
Please note: This aircraft is excluded from Pegasus Lifestyle Management and must be stored in a personal hangar.
”
— Warstock Cache & Carry description.

The Mammoth Tula is an amphibious V/STOL flying boat featured in Grand Theft Auto Online as part of the Smuggler's Run update.

The Tula is prominently based on the Kaman K-16B (which is a modified VTOL Grumman G-21 Goose), seen in the fuselage, cockpit and undercarriage arrangement, with the wings, four-engine layout and the tiltwing feature derived from the LTV XC-142, an experimental V/STOL transport aircraft.

The plane is depicted with a large fuselage, featuring a long nose and a boat-shaped hull, followed by a split windshield with curved glass. Around the main section, the plane features side windows, sliding access doors and the inset sections and lower hatches for the retractable main undercarriage, while the upper area features the main wings with four engines on either side, which are actually part of a single component that tilts forwards or upwards. The tail boom is relatively long and features an open section for the gunner and a cruciform tail empennage, with the horizontal stabilizers mounted on the vertical one, as well as the corresponding tail landing undercarriage. The interior has ample room for the occupants and features a wide flight instrument with black and yellow dials, similar to older aircraft featured in the same update such as the LF-22 Starling and the P-45 Nokota.

Most of the aircraft's body is painted in a primary color, while the underside and lower surfaces of the wings are painted in a secondary color. It uses a set of wheels similar to trucks like the Mule, the Benson and the Phantom, also seen on other aircraft. 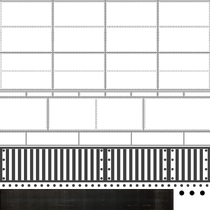 In forward flight mode, the Tula accelerates rather slow, but is capable of reaching decent speeds, on par with aircraft like the Cuban 800 or the Velum. Its handling is generally good, able to maneuver the aircraft quickly, but its cumbersome weight does not allow to perform stunts for a prolonged period of time. The wingspan is rather wide, being susceptible to collide with objects when flying through tall structures such as the skyscrapers of Los Santos or the wind turbines of RON Alternates Wind Farm, but gives general stability on flight.

In vertical flight mode, the vehicle is rather slow compared to helicopters, but makes up for its quick and steady response when tilting the aircraft to a side, allowing to safely land on areas with little to no space for conventional planes (i.e. helipads) or for strafing/bombing runs. Similar to the Hydra, however, switching from vertical to forward mode may cause the vehicle to lose some altitude, so players should have the aircraft on a considerable height to avoid crashing it into any ground obstacle.

Care should be taken when landing the plane on water, as a steep nosedive or a hard impact would either disable it or blast the ailerons, rendering it very difficult to use in forward flight mode. In fact, attempting to take off with the ailerons missing may cause a severely erratic behaviour, especially when equipped with JATO thrusters.

The Tula is powered by four turboprop engines according to the website description and in-game model. Its sound is similar to the one from the Titan.

The aircraft can be equipped with eight JATO thrusters, which are intended for a near-instant take-off and quick acceleration. JATO thrusters propel the aircraft for 5 seconds and are recharged upon landing.

Similar to most aircraft featured in the update, the Tula can withstand two homing missiles before it is destroyed with a third one, making it a decent choice of transport. However, because of its size, the Tula can be an easy target. Also, because of its performance, the Tula may not be able to fight against more nimble weaponized aircraft or even any vehicle armed with homing missiles, as it lacks heavy weaponry. The gunner on the back is very exposed to gunfire and will fall off if the plane is flying upside-down.

A Tula in the update's offical artwork.

Pre-release screenshot of the Smuggler's Run update. A Tula is seen at the left (blue plane).

Pre-release screenshot of the Tula.

Official screnshot of the Smuggler's Run update, featuring a Tula with the NOOSE livery, JATO thrusters and rear-facing minigun. 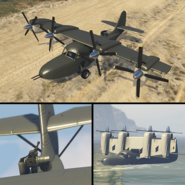 The Tula on Warstock Cache and Carry.

The Tula on Rockstar Games Social Club. Note the early version of the N.O.O.S.E. livery.

The Tula on the updated Rockstar Games Social Club.

The Tula in a cinematic preview on the Rockstar Games Social Club. 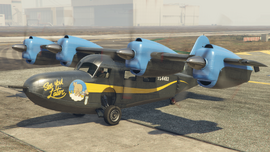 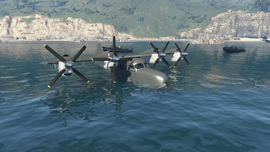 The Tula in the "Unmarked Weapons - Smugglers" thumbnail.