GTA Wiki
Register
Don't have an account?
Sign In
Advertisement
in: Images Needed, Articles with section stubs, Side Missions,
and 2 more
English

It is located at the RS Haul depot in Flint County, just west of Los Santos and north of Helena Wankstein's Farm. The missions are activated by standing inside the red mission marker. The business generates $2,000 per day after completing all eight trucking missions. They become available after completing Catalina's mission, Tanker Commander, which features one of the depot's employees, Mr. Whittaker. The missions consist of either delivering cargo within a time limit, delivering an illegal cargo whilst being pursued by the police with a three or four star wanted level, or delivering a fragile cargo without damaging it. The wanted level cannot be decreased even with police bribes or, if the player manages to get in, any Pay'n'Spray. If the player fails the mission, the wanted level will stay with the player but they can now use police bribes and spray shops, while passing the mission will automatically remove their wanted level. The successive missions are increasingly difficult, with tighter time limits, stronger police attention or more fragile cargo, while also covering a larger area of land to reach the destination. Leaving the cab or detaching the trailer for too long will result in mission failure. After San Fierro locations are completed, cargo heading for Las Venturas will be a combination of fragile and timed objects, or any of the three, or all at the same time.

Goods must be delivered quickly. The player starts with a maximum of $1,000, with a timer telling when the player has to be at the destination. If the goods are late, cash will be cut in half. If it's later, cash will be cut in half again. Even later and the mission will be failed. The destination of the first mission will always be located in Red County, usually with the player taking the road nearby the depot heading north towards Blueberry, which is within east or central San Andreas.

Goods must be delivered without damage. The player starts with a maximum of $1,500. A damage bar will record the amount of damage the truck and the cargo receives. The more damage the cargo receives, the less cash will be paid out. Because the player is just beginning, the decrease of money will not be as drastic as the future missions. On this mission, the cargo is usually sent to Montgomery, east San Andreas.

Illegal goods must be delivered. The player starts with $2,000. The player will receive a minimum wanted level of three stars once the player leaves the compound. Locations can include destinations within the southern parts of Los Santos.

Similar to mission 1, goods must be delivered quickly but there is a shorter delivery time, a longer distance, and a reward of $3,000.

The goods are extremely fragile, more fragile than the second mission. The player starts with a maximum of $4,000.

Similar to mission 3, illegal goods must be delivered and the player receives a three stars wanted level. The player starts with a maximum of $5,000.

Goods must be delivered quickly and without damage, a combination of missions 1 and 2. The player starts with a maximum of $7,000. Requires access to Las Venturas.

Similar to mission 3 but with highly illegal goods. The player will receive a minimum wanted level of four stars upon leaving the compound. Requires access to Las Venturas. The player starts with $10,000. 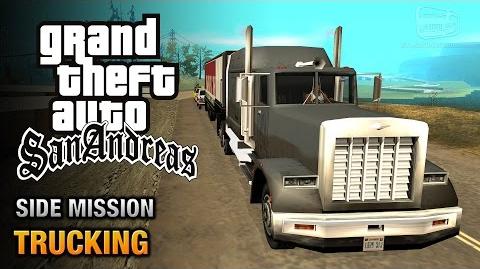