Standard White - 100%
“Stunningly beautiful and astonishingly violent, the Lampadati Tropos may have a European name, but it's got an American heart. This is the car that defined a whole generation of rally design, so if your favorite pastime is calling other people's choices derivative then this is by far and away your best bet.”

The Lampadati Tropos Rallye is a two-door rally car featured in Grand Theft Auto Online as part of the Cunning Stunts update.

The Tropos Rallye is primarily based on the Lancia Stratos rally edition, seen particularly in the overall compact body shape, wide rear body, pop-up lighting area, additional rally lamps, and indicator lights positioned on/beside the grille. The rear lights are similar to the Stratos', albeit twin, taking some influence from wide-body Chevrolet Corvette C3's. The front fascia of the vehicle takes inspiration from the Ferrari 288 GTO, seen particularly in the indicator lights and the front underside spoiler. Said car also has influence in the rear lights. The Tropos Rallye is the first vehicle to feature pop-up headlights in GTA V. It is also the first vehicle to feature pop-up headlights since the Hakumai in GTA IV.

The front arches of the car feature small ducts directly above the pop-up headlights for extra decoration. Under the front bumper and light unit is a spoiler with additional intakes, the central one being wider and larger than the ones beside it. The front clam of the vehicle opens to reveal a spare wheel tied with green straps, in a similar manner to the Trophy Truck.

The cabin area makes use or a curved windscreen with a single wiper on the centre, while the trims and the A-pillars are finished in black. A set of mirrors can be seen near the A-pillars, as well as black door handles.

On the rear area, the car features a roof-mounted lip spoiler and a set of rear louvers in place of a rear window, covering what looks like two vented panels for the engine bay. The rear end features a ducktail spoiler and a set of circular tail lamps, composed of outer red lamps and smaller turn/reverse lamps within these. The rear arches are wider in appearance and have a set of plastic mudguards, while twin exit, twin exhausts are found coming out of the rear body. Exhaust silencers can be seen underneath the vehicle, behind the rear wheels. The rear clam of the vehicle also opens, to reveal the vehicle's V6 engine and an inner wall/window behind the cabin area.

The underside area of the car uses a set of single wishbone suspension with protective layers for the front axle, and a multi-link suspension system for the rear axle, with each of the rear axle shafts having parallel trailing arms, similar to the Omnis.

The interior of the car makes use of steel foot rests, red race seats and carbon-fibre door panels with exposed door frames and pull straps. The Tropos Rallye includes various switches and buttons on the dashboard, and features a knob reading F/R, likely indicating a rear/four wheel drive locking differential. An RPM indicator can be seen over the steering column, and a large extended gear-shifter is centralized on the console between the seats. Also, a radio is seen located under the dashboard, on the passenger side.

The primary colour of the car is applied on the bodywork and the interior stitching, while the secondary colour is applied to the roof, pillars mirror shells and the exposed door frames. The wheels have a unique rim design, consisting of star-shaped rims with thinner spokes and small borders on them, while having a pentagonal centre. The tyres have a detailed treaded pattern shared with the Omnis. The rear wheels are also wider than the front ones and the rims have a dedicated "Wheel" colour.

Both liveries have the same sponsors, although the Stronzo livery adds the corresponding sponsor on it:

The vehicle has good performance for its design, although most other vehicles in its class are still superior to it. Its off-roading capabilities are impressive thanks to the mid-rear engine layout, which gives it less body weight and better power to weight ratio. The vehicle also sports a compact design giving it minimal weight.

The Tropos has a relatively small steering radius when compared to other similar cars, meaning it has a tendency to understeer at speed. The high revving engine gives a large amount of power and extra fuel causes large backfires during shifting and deceleration.

Among the rally cars featured in the game, the Tropos Rallye is one of the best balanced when taken away from tarmac. The relatively light weight, combined with its low centre of mass and short wheelbase, give it very good cornering ability and stability on loose gravel and dirt surfaces.

The Tropos is one of the first vehicles in the game to sport a modeled V6 engine, which is carburettored/throttle bodied, and laid transversely. Said engine is coupled to a 6-speed gearbox in a rear-mid engine, rear wheel drive layout. The engine sound is low-revving and louder, appearing to be a lower-pitched, edited variation of the one used on the Cheetah.

A Tropos Rallye shown in the update’s promotional artwork.

Front view of the vehicle with its pop-up headlights on. 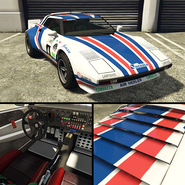 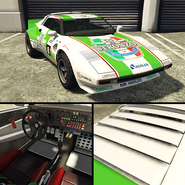 The Tropos Rallye on the updated Rockstar Games Social Club.

The Tropos Rallye in an official Rockstar Advertisement for the first GTA Online Bonuses in April 2020. The ad also features a new name badge logo for the vehicle.

Animated varient of the same advertisement.