Each iterations of the Tropic are essentially flybridge motor yachts or cabin cruisers, evidently featuring living space on the lower compartment of the boat and a partially covered bridge on top; in Grand Theft Auto: Vice City and Grand Theft Auto: Vice City Stories, a small kitchen is visible from the door in the back, while in Grand Theft Auto: San Andreas, the front windows are semi-transparent, allowing the player to see a small living area with red curtains, tables and two sofas. The Tropic in GTA Vice City Stories, however, is sharply reduced in height, with its top chopped and featuring an open flybridge. In GTA San Andreas and Vice City, it closely resembles a Chris-Craft Corinthian 33, but without the bridge cover.

It is also one of the boats wanted by the Civil Asset Forfeiture Impound for export in GTA Vice City Stories.

In Grand Theft Auto IV, the Tropic is still a cabin cruiser, but has a low-profile cabin housed in its bulky hull and has moderate speed. The boat, however, is distinguishable from other speedboats by its accessories. For any Tropics with an optional spoiler, retractable roofs (front, back, or both) or a glass fairing (front only) may be further attached on the spoiler itself. As the boat is reduced to a size smaller than even the Jetmax or Squalo, the title of largest boat now belongs to the Tug, which is easily twice the size of the pre-GTA IV Tropic.

It is essentially the same Tropic, but minor tweaks have been made to it, such as the metal frames found around the vehicle and its upper front is mostly predominated by the primary color and different detailings. It spawns in the colors of the yacht purchased - altering the color of the yacht will consequently alter the color of the boat and any other boats featured with the yacht. 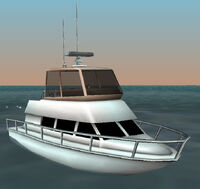 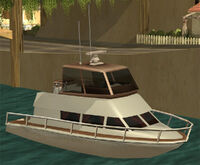 The GTA San Andreas rendition is remarkably fast, comparable to a Squalo. Due to the two large Pump-Jet engines, the boat is able to navigate across shallow waters. It is a great boat for transporting large gangs, and great for just cruising around in the waters of San Andreas, but the only disadvantage is its bad turning.

The GTA IV rendition features greatly improved performance, but remains as a lower-end speedboat. However, it is the third-fastest boat, having a similar speed as the game's Dinghy.

In GTA V and GTA Online, the boat retains its significant qualities from its previous rendition, however the handling has been revamped due to the large overhaul of vehicle physics. Its mass has been reduced significantly, allowing to have higher speeds. 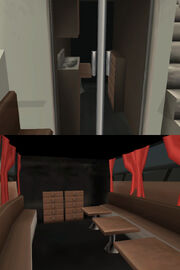 Interiors of the Tropic in Grand Theft Auto: San Andreas; the former is available in all pre-GTA IV Tropics. 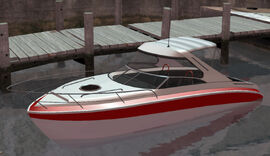 A Tropic in GTA IV, with a spoiler, a canvass roof and a fairing.

Side view of the Tropic in Grand Theft Auto V.

A Tropic in GTA V without its canopy extension. (Rear quarter view)

A Tropic on a Boat Trailer.

The Tropic on the updated Rockstar Games Social Club.

The Tropic in the cinematic preview on the Grand Theft Auto V Rockstar Games Social Club.

The Tropic in the cinematic preview on the Grand Theft Auto Online Rockstar Games Social Club. 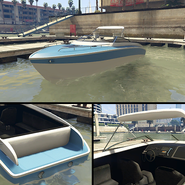 Rufus is the name for a boat based on the Tropic, appearing as a prop in Grand Theft Auto V.