GTA Wiki
Register
Don't have an account?
Sign In
Advertisement
in: Challenges, Missions, Missions in GTA V,
and 4 more
English

In-game time
“Triathlons bring three activities together in an epic way. In nature, it is doubtful you will be required to swim, bike, and run to escape the jaws of a bear or shark – but these days – the threat is your own ego and the darkness setting in as you grow older. The marathon was an ancient ritual popularized by the Greeks – like buggery – but combining exercise and ego is an American tradition.”
— GTA V Website

Triathlons are multi-stage marathons in Grand Theft Auto V, where contestants need to swim, ride a bike, and run throughout the marathon.

“Tests of endurance for people with too much time on their hands that require a ton of expensive specialized equipment. Triathlons are so inclusive!”
— GTA V Manual

There are a total of 3 Triathlons. The first one becomes available after the mission Daddy's Little Girl, and the other two are unlocked as the player completes the previous triathlons. Each character may run any of the triathlons, so long as they are unlocked.

The Triathlons are made up of Swimming, Cycling, and Running. They are a great way to boost the player's stamina. Medals in all three events are required for 100% completion. The player receives no reward for completing them other than potential increases to stamina, strength, and lung capacity. Unlike the Beat the Cock! triathlons, these may be accessed on any day, at any time of the day or night.

The opponents use a catch-up/rubber band AI system, meaning that they will regularly catch up to the player or gain the lead momentarily regardless of your speed or tactics. On occasion, however, especially in the Coyote Cross Country Triathlon, the system will glitch out and one or more opponents will receive a massive speed boost, shooting several checkpoints ahead of the player, however, they will eventually slow down during the final leg.

The third and last triathlon (The Coyote Cross Country) will become unavailable for both Michael and Trevor between the missions Minor Turbulence and Monkey Business. This happens because both of them are outcast from Los Santos by Martin Madrazo during that time period, and the last part of that triathlon requires the player to enter the city, which would cause a contradiction with the storyline.

While no message is displayed in-game like with most other similar events, each character that completes the triathlon series gets a triathlon outfit added to their wardrobe. 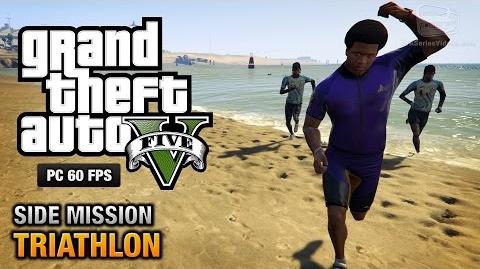