"The Triangle Building is reportedly the most photographed building in the world. It's got a funny shape and it's famous. It was built by some really feminine dudes."
―Peep That Shit description.

The Triangle Building is bordered by Garnet Street to the south, Hematite Street to the north, Burlesque to the west, and Columbus Avenue to the east. The building appears as a 16-story building in a triangular shape, serving as the end of Burlesque's south approach as it merges with Garnet Street. The building holds several restaurants, including Viendemerte, Rusty Brown's Ring Donuts and an Al Dente's, with Grand Opening banners along the side. Revolving doors around the building address the building as "1717", however it is unknown which street it is addressed to, as this sign is repeated on all three sides.

The building is situated south of the Daily Globe Building, west of Leopolds and east of Spender's. It is also nearby the Triangle Tower, Rotterdam Tower and Grand Easton Terminal.

Peep That Shit lists the Triangle Building as one of their "sights" to soak in on their website, peepthatshit.com, located at peepthatshit.com/sightstriangle.html. They claim the building was "built by some really feminine dudes"[1] and that it is "reportedly the most photographed building in the world".[2] The describe it as having a funny shape and it being famous. [3]

In Grand Theft Auto: Chinatown Wars, only the base of the building is visible due to the "top down" perspective. However, its possible to see the entire building in the background when talking with the drug dealer in City Hall, Algonquin. The Viendemerte restaurant is absent in this game. A Banshee will always spawn near the building.

The Triangle Building appears to be based on the Flatiron Building located in Flatiron District of Manhattan, New York City. 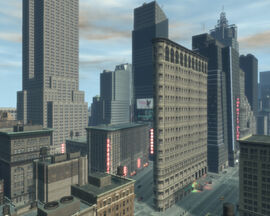 The building in GTA IV.
Add a photo to this gallery

Base of the building. Note the address.

Looking up at the building.

Al Dente's on Burlesque side.

Triangle Building on Peep That Shit's "Soak in the Sights" section.

The building in Grand Theft Auto: Chinatown Wars.
Add a photo to this gallery

Retrieved from "https://gta.fandom.com/wiki/Triangle_Building?oldid=1136319"
Community content is available under CC-BY-SA unless otherwise noted.