GTA Wiki
Register
Don't have an account?
Sign In
Advertisement
in: Challenges, Missions in GTA Vice City, Side Missions
English

Trial by Dirt is a side mission in Grand Theft Auto: Vice City triggered when jumping on the parked Sanchez on the dirt track in Downtown.

Trial by Dirt is a two-lap checkpoint mission with no time limit. To complete this mission, the player must clear each checkpoint without destroying their bike or dismounting too long from it. There is a health pickup nearby on the track, in case Tommy falls off and gets injured. The course is essentially the reverse of that of Test Track (which is activated by entering the Landstalker spawned by the Sanchez instead).

The player can keep playing this mission once they've completed it. An additional challenge is added each time the player beats their record:

Completing the mission for the first time rewards the player $100, and accumulates an additional $100 each time the player beats the mission's record time. 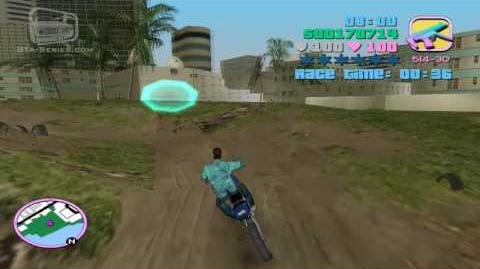