In-game time
“Take these boys over and whack the Triad Warlords! Hell, if you got a chance, pop some of their soldiers too.”
— Toni Cipriani

Triads and Tribulations is a mission in Grand Theft Auto III given to protagonist Claude by Leone Family Caporegime Toni Cipriani from his mother's restaurant in the Saint Mark's district of Portland, Liberty City.

Claude goes to the restaurant, looking for more work from Toni. Claude finds a letter left on the table telling the task of getting rid of three Triad warlords and informing that they are officially at war. Toni has left 2 Leone henchmen to help Claude.

The first warlord is located in Chinatown, with Claude driving to the location and killing him and the Triads who are with him. The second warlord is standing near the pedestrian only walk part of Chinatown, seemingly alone. When the Triads spot Claude, they ambush him but Claude kills them and the second warlord. The third is located in the Fish Factory, Claude either enters via a Van that opens the gates, or used a grenade/molotov to destroy the third warlord. 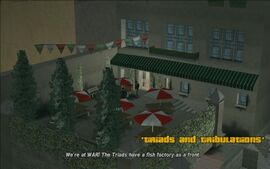 After Claude arrives at Momma's Restaurante in Saint Mark's, he once again finds Toni missing. Instead, his mother tells Claude that he once again left a letter behind. 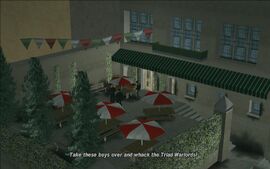 The letter states that the laundry is not paying the protection fee again and thinks that the triads protect them. The triads have started a war on the streets. Toni wants Claude to take two of his men and kill 3 triad warlords. 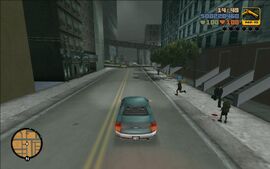 Claude and the mobsters head pass through the gang war that has begun in the streets of Portland and drive towards the location of the first warlord. 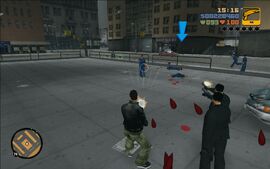 Claude killing the warlord and his gang. 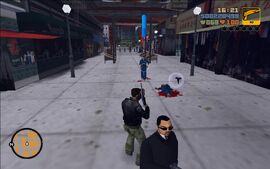 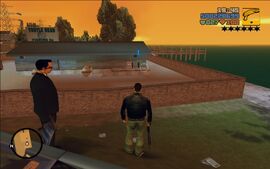 Claude at the location of the third warlord. 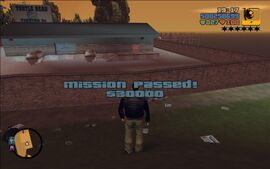 After throwing grenades over the wall, mission passed.