Being a variant of the Mule, the Triad Fish Van is essentially a box truck distinguishable only by its Belly-Up Fish & Seafood Processing Plant name visible on the sides and front of the truck's cargo compartment (which, coincidentally, gives the internal name of the vehicle, BELLYUP). The Fish Vans also earn the distinction as the earliest gang cars to appear with multiple body colors (shared with the Mule), when other gangs cars in Grand Theft Auto III were only using single color schemes, making it the only gang car that has multiple colors in GTA III. In Grand Theft Auto: Liberty City Stories, although the Mule's front fascia was updated, the Triad Fish Van remained completely identical to its GTA III version.

The Grand Theft Auto Advance rendition of the vehicle, known as the "Belly", received substantial changes, modifying its role and design.

In comparison to the similarly designed Wong, the Belly in GTA Advance is slightly smaller in size. The truck is also driven by civilians instead of the Triads, as the Wong effectively takes over the role as the Triads' gang car. The Belly always spawns in yellow, unlike the Wong, which has multiple colors. 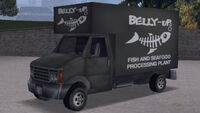 The Triad Fish Van is the fastest large truck in the game, and thus it has better acceleration than the Mule, with a lighter body and improved speed due to the AWD layout and its weight (2600 kg). Its size also makes the Triad Fish Van one of the largest gang cars in the series, alongside the Karma Bus from Grand Theft Auto 2. It is powered by a four-cylinder diesel engine, like the regular Mule and most vans in the game.

The Grand Theft Auto: Liberty City Stories rendition is powered by a larger inline-6 turbodiesel and emits the same sound as the heavier trucks. However, its drivetrain was rearranged into an RWD layout and has an increased weight (3500 kg). Despite this, the vehicle still performs better than the Mule. Both the Triad Fish van and the Mr. Wongs have similar performance. It remains as the fastest large truck in the game.